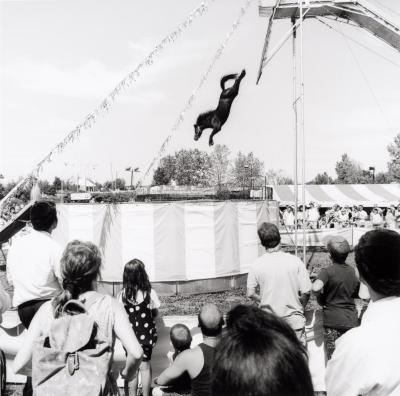 For a more recent CV or bio please visit the artist's website, tobyold.com/

In the dictionary it is only a short distance from the word diverse to the word diversion. Diverse is described in positive terms meaning distinct, while diversion collects the negative connotation of deviation. Over the past 18 years Toby Old has produced photographs around several themes that explore the latitudes between the poles of these two meanings.

In his various projects Old has looked at the activity and people on the fringes of society, from sex-exhibition disco parties to VA hospitals. He has also concentrated on more accessible aspects of American culture including county fairs, civic events, and the sport of boxing. In each situation he always seems to find the right moment and be in the exact spot to create juxtapositions that convey the immediacy only photography can achieve.

Old's photographs exhibit more than his accurate reflexes and his understanding of visual dynamics. His photographs take us to the fringes of our culture and then send us back looking for the meaning at the middle. By looking beyond the plane of the ordinary, Old opens a window to our fantasies, entertaining diversions, and forgotten citizens.

When trying to achieve a regular pulse that signals a strong and steady state of health, we must tax our system so we know when and how it returns to normal. Old sees a society that is constantly checking its pulse and his photographs show us that in order to gauge the health of our society at the middle, we must look first at how far we are able to move to the edges.

Jeffrey Hoone ©1994
Every year since 1985 we have produced four major exhibitions that have been accompanied by catalogues of one form or another. In 1998 we changed our policy and combined all of our publication efforts under the banner of Contact Sheet, one of the longest-running photography publications in the world. The four issues that we produce each year accompany our four major exhibitions and generally highlight the work of a single artist.

Supporting the work of individual artists has been a long-standing goal of Light Work, which is evident most prominently through our Artist-in-Residence, exhibition, and publication programs. The Artist-in-Residence program is our main focus, where we support artists from all over the world to work at our state-of-the-art photography and computer lab facility—to do what they do best—make new work. When we make decisions about who to exhibit in our main gallery we naturally, although not methodically, turn to the artists we have gotten to know through our residency program. This process has served us well, allowing us to respond to new and inventive work and to consider the contributions that an individual artist has made over a period of time.

Toby Old was a visiting artist at Light Work in 1980 who had arrived as an art photographer through the circuitous route of championship collegiate diving and dental school. Somewhere between Stillwater, Minnesota and lower Manhattan, Old served in the Army Dental Core and discovered the Aperion Workshops in Millerton, New York, where instructors like George Tice, Elaine Mayes, and Charles Harbutt opened him up to the creative energy of photography.

Once he caught that wave Old was gone. While grounded in the traditional aesthetics of Aget, Evans, and Frank, Old was interested in the new cacophony of the 1970s and would honor the past and explore the future by merging the clarity of Walker Evans with the boundary-illuminating and risk-taking adventures of Charles Gatewood. In the process Old accepted Evans’ commitment to precision through repetition, and Gatewood’s dedication to exploring society’s edges. In some way this might be an introduction to a mid-career retrospective, which at age sixty, Old richly deserves. But the scope of this exhibition and catalogue is an observation of an artist in mid-flight, with more stories to tell and complete. Toby Old has always organized his work into series. This is as much a practical matter as it is a compelling reason to simply get started and keep going. As the late Roger Mertin often stated, “Working on a series was always a good reason to stop the car.”

Of the many series that Old has completed over the past three decades, some have been finished in a relatively short period of time, while others are continuous and ongoing. “Waterlog: The Beach Series”covers more than twenty-five years and displays a persistence of vision that characterizes his best work. The writer Norman Mailer emphasized this point by saying, “Toby Old takes pictures of the sort few other photographers would dare to. He succeeds in coming up with photographs that stand on their merits not only because of the subject matter, but for his art in transcending it.” Old has always found comfort in mining the edges of our culture in order to examine our imperfections, quirks, and eccentricities. In that process he provides us with a rich portrait of ourselves by revealing our strengths and weaknesses. Sooner or later most of us make it to the beach, or at least down to a cool spot by the water. Being at rest and ungarded at the beach seems to give us all a license that we don’t abide by in any other public place. It is a perfect environment for Old to show us that in order to understand the aspirations that form the middle pulse of a society, it’s best to look at the moments when we are most at ease.

With elegance, wit, and an uncanny ability to separate and save a decisive moment from a mass of confusion, Old’s photographs find us letting our hair down as he reveals how surprising, strange, and magical our entire life would be if every day were a day at the beach.