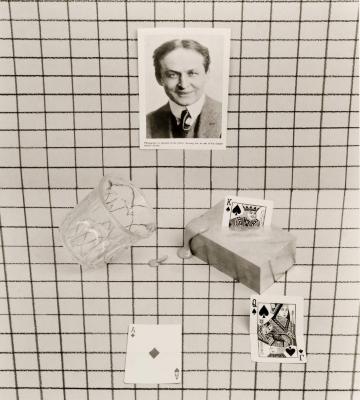 The inspiration for Peter Delory's work might have started while he was listening to Elvis Presley or Chuck Berry tunes under the hood of a 1958 Plymouth at his dad's gas station. Delory's finely crafted and ingenious still life color photographs are from an ongoing series titled, 'The Wild and the Innocent'. One of the qualities that make this body of work enjoyable is recognizing the pleasure the artist must have had creating the pictures. But their success lies in how they coolly remember and deftly describe certain ideas and attitudes that shaped the values of an entire generation.

In Short Series  The West

Peter de Lory portrays the West as a symbol that cuts across the expanse of the American experience.

The West symbolizes and summons a diversity of characters, actions, settings, and conflicts from the grandeur of breath-taking vistas to the depths of cultural genocide. The power of the West is as encompassing as a force of nature—and like the natural force of the wind we must accept its destructive power in order to be refreshed by its cooling breeze. Peter de Lory brings this tempered sense of respect to his images of the West in order to understand its power as a symbol and myth and to extend homage to its natural beauty that changes but refuses to be diminished by civilization’s constant impact.

The majority of the work in the exhibition is presented in the form of triptychs. These triumvirate groupings of images give de Lory the freedom to shift his interpretation from single overt descriptions to a form we can read like narratives or epilogues. His elegant use of triptychs reference their early predominance as a devise employed in religious paintings and suggests de Lory’s reverence for the subjects and vistas he records.

In a written statement about his work de Lory acknowledges a debt to authors of contemporary western literature whose combination of romance and skepticism about the West parallel and inform his personal vision. De Lory mentions the writing of Edward Abbey, Ivan Doig, Wallace McRae and Wallace Stegner as particularly influential for their “expressed images and first hand observations that weave a visual dialogue which characterize western life and the sense of being engulfed in the awesome landscape of the American West.”

The celebration of the awesome landscape is a clear point of departure throughout the work in the exhibition. In the triptych titled A Desert Landscape de Lory gives us a picture of the West that is precise and pristine, and as breathtaking as anything found in nature.

Like any good storyteller de Lory allows the memory of one anecdote to carry over into another. The triptychs titled Heart, Figure and Mountain and In the Spirit of Place introduce our footprint into the landscape so delicately that it allows us the space to see ourselves as a welcome addition rather than an incongruous intrusion. Even in his group of five pictures titled We Rolled Through the West the harsh tone of the title is softened by the final image of an automobile tire that sports a wide white wall, evoking a romantic image of automotive style that has already been left behind on the road to progress.

The romance vanishes in Western Epilogue, replaced by the gravity of loss and destruction that has followed the lore, the myth and the presence of the Western ideal. In this triptych de Lory presents a stuffed bear, an Indian mannequin and a pile of antlers as if they are artifacts in a museum—standing as lifeless examples of icons we have decimated in our rush to collect, harvest, and preserve them. Cultural destruction and environmental decay are difficult realities for us to acknowledge especially when we acknowledge them as things past that we are powerless to correct. In the first panel of the triptych a human hand reaches out and touches the bear—perhaps as a sign that we will still have time to find a pulse and reconcile the destruction we have caused.

The sense of pain and loss that de Lory evokes in Western Epilogue provides a disquieting context for the triptych The Lines in My Hand, My Hat, and the Land. This triptych is devoted to the Western icon that is larger than all others—the cowboy. The cowboy is such a pervasive symbol of the western mystique that all of the destructive history of the west has the potential to end up at the feet of their dusty boots. Even today the image of the cowboy persists as the personification of good and evil projected from billboards that block our view with promotions for cigarette companies. In this triptych deLory ventures carefully to strike a balance between the image of the cowboy as rugged individualist, solitary hero and vanishing anachronism.

The final triptych in the catalogue titled A Western Landscape is perhaps the most personal piece in the exhibition. The images to the right and left show us a magical arched rock formation that frames a further expanse of an arid and romantic Western vista. The continuation of these two images are interrupted by the central panel of the triptych which frames the interior of a hotel room. In the room on a bedside table is a coffee cup, a room key and an empty bottle of beer. A velvet painting of a Western landscape hangs above the table as if to mock de Lory’s photographs on either side. But we also can imagine that the room has been rented by deLory as a haven to relax and have a beer, leaving the experience of a night camped under the stars for another time.

The aura and allure of the West is subject to many representations and permutations and we have many options of how to make that experience our own. In this photograph and throughout the images in Short Series  The West Peter de Lory confronts and accepts the weight of many representations, interpretations, and contradictions heaped upon the West as he describes the West as a powerful and complicated force that has drawn him into its mystique.