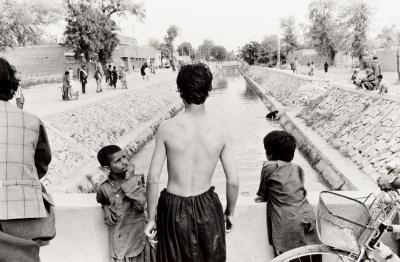 Ed Grazda has traveled from his home in New York City to photograph in places that, even by NYC standards, would be described as exotic and perilous. Over the past twenty years his independent photographic journeys has taken him to Bolivia, Peru, Guatemala, Columbia, Afghanistan, Pakistan and Vietnam. When asked to explain how or why he chooses a place to visit the closest he comes to a descriptive reply is that he is 'searching for the good light.' Grazda saves his descriptions for his photographs, as he surveys the connections between curiosity and intrigue within the diverse theatre of human nature.

For the past 12 years Grazda has had his eyes in Asia - as a witness to the emergence of Afghanistan from the middle ages and as a notary to the phoenix of a recovering Vietnam. Grazda travels alone making contacts as he goes, believing in the wisdom of Sir Olaf Caroe that if a stranger has 'eyes to see and ears to hear...there will be a people to make him feel that he has come home.'

Free from journalistic intentions or political pronunciations, Grazda reveals the passions of cultures and communities that live close to the core of basic human need. His photographs entice us like a dare to cross the line between safety and struggle to examine the weight of history and the conventions of ancient beliefs held in a shrinking world.

Grazda's photographs often assume the character of entries in a personal journal and like a journal they remind the artist of his travels, renew his intentions and stand as evidence to his experience. In one entry made along a high mountain trail in Afghanistan close to the front of rebel fighting, travelers pass and exchange the greeting 'May you never be tired - May you never be poor.' This glimpse of the pursuit of simple rewards resonates in the photographs of Ed Grazda as he records the diversity that makes cultures unique and searches for the clues within the good light that link us together.