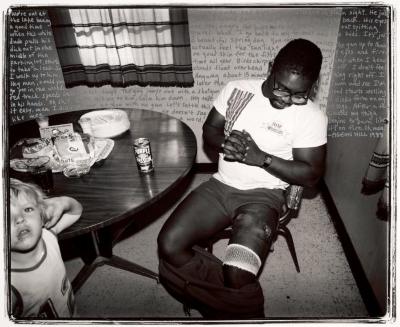 We're out at the lake having a good time when this white dude pulls his dick out in the middle of the parking lot, starts to take a leak. So I walk up to him. Hey man, could you go pee in the woods. There's women and kids here and you're  in plain sight. He just  me up and down croaks out, I'll be right back. His eyes are red, angry. He hops in his pickup peels out spitting gravel. Whoa. I go back to my friends and the kids. It's just a  beautiful spring day. You can actually feel the sunlight on your skin for the first time all year. Birds chirping clouds float overhead. Anyway about 15 minutes later the red truck speeds into the lot, stops. the guy jumps out with a shotgun in his hands. Oh shit. I try talking to him, calm him down. Hey take it easy, man. I didn't come at you with a gun. Let's settle this like men. He doesn't say a word, raises the gun up to those angry eyes and fires. I jump when I hear the gun go off. I don't feel anything right off. I look down and see i'm hit. Blood starts welling up, red disks form on my pant legs. After a few minutes my thigh begins to burn like it's on fire. Oh man.
-Pigeon Hill 1988

Jeffrey A. Wolin is Ruth N. Halls Professor Emeritus of Photography at Indiana University. Wolin’s photographs have been exhibited in over 100 exhibitions in the US and Europe, including solo shows at the Art Institute of Chicago, International Center of Photography in New York, George Eastman Museum in Rochester and the Museum of Contemporary Photography in Chicago and group exhibitions at MoMA, Whitney Museum, and LA County Museum of Art.

Wolin is the recipient of two Visual Artist Fellowships from the National Endowment for the Arts and a Guggenheim Fellowship. He is represented by Catherine Edelman Gallery in Chicago.

Outside of Bloomington, Indiana there are limestone quarries that supplied the stone for the construction of three-quarters of all the stone buildings in the United States including the Flatiron Building, Rockefeller Center and the Empire State Building. As the Empire State Building grew almost seven floors a month the quarries grew wider and deeper at a dizzying rate, the look of American cities and the relationship of the individual to the environment changed forever.

The story of the working class stone cutters forming the building blocks for the temples of corporate America is a tale ripe with many political implications and overworked dialectics. Jeffrey Wolin tells the story of the stonecutters in a clear and precise photographic essay. He mixes romance with sweat, contrasts natures power with human ingenuity and produced a group of images that match the poetic heroics of his subjects. Wolin finalized the project in 1985 with the publication of Stone Country, a book with words by Scott Sanders.

During his residency at Light Work from June 1-30, 1988 Wolin worked on a new series of pictures that combine his curiosity about his surroundings and his interest in the written word. In this recent work he takes pictures he made in a housing project outside Bloomington and combines them with short titles, factual information or autobiographical narratives. Writing directly on the prints in silver tones that play off the surface of the images, Wolin breaks away from the constraints of the external landscape around Bloomington, to combine personal narrative with cultural observations. This work is in a formative stage and he is still experimenting with the proportions of the prints and their final presentation. Wolin possesses a keen understanding of the human condition and the sensitive skills of a patient narrator that are sure to make this new work larger than the sum of its parts.

Jeffrey Wolin lives in Bloomington, Indiana where he teaches photography at the University of Indiana. Additional support for Wolin's residency was provided by Robert Shanebrook and the Eastman Kodak Company.