Scott Casher
The DuPont Company Lent Itself Well to the Vietnam War Effort... 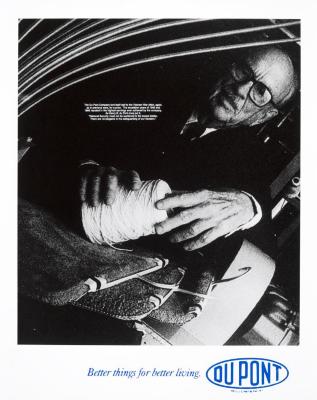 The Du Pont Company lent itself well to the Vietnam War effort, again
as in previous wars, for a price. The escalation years of 1965 and
1966 resulted in the highest earnings ever achieved by the company.
As Henry B. du Pont once put it,
"National security must not be auctioned to the lowest bidder.
There are no bargains in the safeguarding of our freedom."

Multinational corporations, once impervious to public sentiment, have started to pay close attention to their image as issues of environmental safety and human rights play a more dominant role in conducting business successfully in global markets. To portray a more palatable facade, corporations select will information about their activities in order to graft social, moral and ethical values unto their image. This is accomplished through advertising, public relations, and in many cases as sponsors of exhibitions, concerts and performances.

The image enhancement process of multinational corporations is the subject of Scott Casher's most recent work that he continued to explore during a residency at Light Work from January 15 to February 15, 1990. In the work from the series reproduced here Casher concentrates on the image building efforts of the Du Pont Corporation. The photographs and text in the series were selected from his own research, which included newspapers, magazines, 'history' books, Du Pont advertisements and annual reports. By styling the work to resemble Du Pont magazine ads, Casher clearly demonstrates how a corporate image can be manipulated depending on how information is controlled.

In one ad that Casher appropriated for the series, Du Pont proudly extols their efforts of creating artificial legs that are 'more like life itself' by showing an amputees return to the neighborhood basketball court. Yet before we can feel the warmth of the photograph, other pieces in Casher's series clue us in to Du Pont's profiteering war products and racist practices. With this new information the photograph of the black amputee basketball player who lost his legs in the Vietnam War takes on a new meaning. No amount of marketing and promotion can change the evidence of facts, but as Casher points out in his work, we must walk lightly through the world of images and pause to unravel their meanings and implications.

Scott Casher is a recent graduate of Hampshire College and lives in Vatalie, NY.