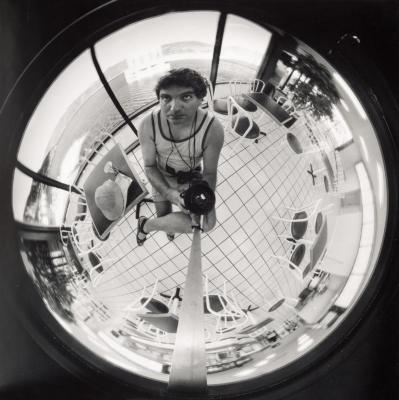 Jim Pomeroy is interested in the belief and trust we have in photographs and the information they contain. He uses the confidence associated with photographic records and changes the original context of the image in order to allow it to function in a new way. In the same fashion that he looks for images to function in a new way, he finds new ways to present those images. This exhibition consists of 3-D photographic installations ranging from a wall piece that questions the believability of the lunar landing, to binocular viewers that contain embellished 3-D vistas of sites at Artpark in Lewiston, NY, where they were originally installed.

3-D photography in the form of stereo views or cards was introduced during the height of the Victorian era and remained a popular parlor attraction until well into the 20th century when its novel appeal was gradually replaced by movies and other modern distractions. The means of producing the illusion of three dimensions from paired two dimensional drawings, preceded Stereo Photography by several years and is based on a phenomenon of vision, the eyes see slightly different images when directed to a given object. The image from each eye is combined in the brain to produce the sensation of depth and perspective. When a pair of photographs are made depicting this slightly different view to each eye, and are mounted side by side and viewed through a stereoscope, the illusion of depth is created. A stereoscope or stereoviewer is an optical instrument that allows the right eye to focus only on the right image in a stereograph and the left eye on the left image. This simple process recreates the phenomenon of vision in the brain and the two images are perceived as one three dimensional image.

With the exception of a few B grade movies and Walt Disney inspired Viewmaster Viewers, 3-D photography has remained outside of the mainstream of contemporary media production and even more obscure within the artworld, despite its potential for creative investigations. Jim Pomeroy has been working with 3-D photography for a number of years, and the unique qualities of the medium are matched by his ability to understand the variety of ways photographic information can be read. His imagination doesn't stop at the edge of the picture but extends past the reaches of reality and lands firmly in the land of imaginative satire. When the viewer recovers from that journey their perception of photographs, and all their detailed and seemingly accurate information, is forever in question. Yet this is not an unsettling journey but a refreshing realization of the possibilities of photographic information and meaning.

The images reproduced in this brochure actually appear in the exhibition in slide form inside binocular stereo viewers. They demonstrate the kind of images Pomeroy seeks out and how he reworks the image to investigate new meanings through the use of humor and satire. A second component of this project is a 3-D publication that will include three Viewmaster reels of work from the exhibition. When the reels are placed in the appropriate viewers the images appear in 3-D. The 3-D publication will be available in late Spring when the exhibition travels to Buffalo, NY, and is exhibited at CEPA, the co-producer of this project.

Jim Pomeroy is an artist that resists easy classification. He works in a variety of areas from performance art to audio installations and is equally at home with the Viewmaster toys at Kiddie City and the high tech products of Silicone Valley. It seems appropriate that this computer age renaissance artist reaches back to technology spawned in the Victorian era for inspiration to create work that resounds with innovation on the doorstep of the 21st century.

Jeffrey Hoone (c)1988
“A pivotal essence of photography’s role in socialization is the extreme degree of empathy contrived through an easily assumed, identifiable point-of-view. Optically convincing, detailed, and ideally desirous, this rich verisimiltude embellishes the teaching of otherwise simplistic tracts. Correspondingly, the ideologically congruent argument is invisible—one’s own propaganda is called “education.” The grotesque caricature in obvious lampoon, coarse impressions in vulgar burlesque, have been classical devices of aesthetic discourse since Aristophanes. We are not seduced by farce, but rather, sharpened. Question the emotive, manipulative catharsis of sentiment and beware the sublime beauty of the specially-effected supernatural. State-of-the-art spectacle in the age of digitizing pixels promises a greater con-fusion of fact and fiction, truth and deceit, myth and history. Clearly, one can trust a bad joke from a gross fool, but are we not fools to bet our future in the trust of a bad actor orchestrated in the wrong part? Seeing isn’t believing—Believing IS seeing.” — Jim Pomeroy