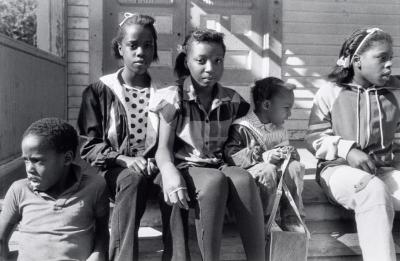 Dawoud Bey (born 1953) is an American photographer and educator renowned for his large-scale color portraits of adolescents and other often marginalized subjects. In 2017, Bey was the recipient of a "Genius Grant" from the John D. and Catherine T. MacArthur Foundation.

Born David Edward Smikle in New York City's Jamaica, Queens neighborhood, he changed his name to Dawoud Bey in the early 1970s. He studied at the School of Visual Arts in New York from 1977–78, graduated with a BFA in Photography from Empire State College in 1990, and received his MFA from Yale University School of Artin 1993. Over the course of his career, Bey has participated in more than 20 artist residencies, which have allowed him to work directly with the adolescent subjects of his most recent work.[2]

A product of the 1960s, Dawoud Bey said both he and his work are products of the attitude, “if you’re not part of the solution, you’re part of the problem. This philosophy significantly influenced his artistic practice and resulted in a way of working that is both community-focused and collaborative in nature. Bey’s earliest photographs, in the style of street photography, evolved into a seminal five-year project documenting the everyday life and people of Harlem in Harlem USA (1975–1979) that was exhibited at the Studio Museum in Harlem in 1979. In 2012, the Art Institute of Chicago mounted the first complete showing of the "Harlem, USA' photographs since that original exhibition, adding several never before printed photographs to the original group of twenty-five vintage prints. The complete group of photographs were acquired at that time by the AIC.

Of his work with teenagers Bey has said, “My interest in young people has to do with the fact that they are the arbiters of style in the community; their appearance speaks most strongly of how a community of people defines themselves at a particular historical moment." [4] During a residency at the Addison Gallery of American Art in 1992, Bey began photographing students from a variety of high schools both public and private, in an effort to “reach across lines of presumed differences” among the students and communities.[5] This new direction in his work guided Bey for the next fifteen years, including two additional residencies at the Addison, an ample number of similar projects across the country, and culminated in a major 2007 exhibition and publication of portraits of teenagers organized by Aperture and entitled Class Pictures. Alongside each of the photographs in Class Pictures, is a personal statement written by each subject. This rich combination of image and text expands the notion of the photographic portrait, and further creates portraits that are each incredibly powerful in its amalgamation, at times surprising, disturbing, and heart-wrenching.

Everything that passes in front of my camera is raw material that can be used in the making of a photograph.' This quote by Dawoud Bey is a helpful point of departure to begin viewing the artist's work. Bey makes photographs in the street amid the noise and confusion of everyday activity as it passes by at a furious rate into the next instant, using the light and life of that environment as his raw materials.

Photographers fascination with the street is a well-worn tradition within the medium, and to make new or original statements within this tradition is a difficult task. Bey has accepted and met that challenge by conveying his keen sense for the quality of light on the street combined with his ability to capture the casual event without disturbing the intimate quality of the scene. In a way, his presence becomes invisible and the scene is recorded as a careful interpretation of the passing moment. In this regard, Bey is able to show us the respectful contemplation embodied in the quiet celebrations and triumphs encountered in everyday life, in a way that is refreshing and honest.