Clarissa Sligh
Jake in Transition from Female to Male Series, or Through the Mirror and What Clarissa Found There, 2000 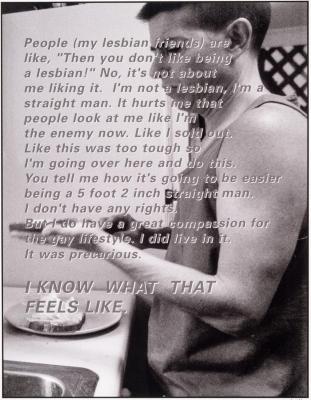 Clarissa Sligh lives in New York City and participated in Light Work’s Artist-in-Residence program, for the second time, in January 2000.

The American Dream promises that if you work hard and persevere there are no limits to what you can accomplish. Clarissa Sligh rode the crest of the dream through an education that includes an MBA, and a successful career as a financial analyst on Wall Street. The dream did not reveal that hard work would not overcome the sexist attitudes and token gestures of inclusion she experienced in the corporate world. Her burgeoning understanding of how her own growing internalized sexism and racism were helping perpetuate these attitudes eventually convinced her to leave the business world to return to her art work.

This search for identity began with a reexamination of her past. As the keeper of her family album of photographs, Sligh began to explore the differences between the impression projected in the best-foot-forward posture of her family snapshots, and her memories of the secrets that were hidden among those images. Sligh began to remember a shared bed with a brother, the illicit intentions of an uncle, the comfort of her grandmother's kitchen and the confusing wonder of a home birth. By combining the snapshots that these memories referenced with hand written words Sligh creates a new framework for her memories and identifies a starting point to gain a richer scope of the influences and attitudes that designed her identity.

The high contrast of her cyanotype and Van Dyke brown prints obscure the nuances present in the original snapshots. Words replace those missing details with verbal pictures that often force us to read around corners or follow the flow of text as it winds across the surface of the picture, underscoring that getting the right information is often a struggle. Abstracted from their original place in her family album and embellished with the words of the artist they become a record that accepts the frailties and secrets of her family. By presenting this completed, yet still fractured picture of herself and her family, Sligh creates an empowering sense of self connection that offers a full and rich view of the human condition, moving beyond the crippled identity that society had reserved for her specifically and for African Americans in general.

Extending her inquiries beyond the family Sligh also investigates formative materials from her past. In her reworking of the universal reading primer Dick and Jane, Sligh questions the values and expectations inherent in the exploits, the dress, the language, and the class and race exclusions presented in this passive but influential learner. She refocuses Dick and Jane, as an obstruction to self knowledge and learning, revealing the saccharine life of Dick and Jane and Spot as an inevitable measure that she and countless others were destined to fall short of.

The Dick and Jane series takes many forms from small edition books to large gallery installations. The series, like the process of learning the book is supposed to encourage, continues to evolve and change. One of Sligh's more ambitious undertakings is a suite of large cyanotype prints titled 'Reading Dick and Jane With Me.' The prints from the series reproduced in this catalogue were exhibited at galleries from New York to San Francisco. At each site the prints were pinned to the wall and gallery patrons were provided crayons to write on the prints. The anonymous additions of drawings and words extend and further personalize the notion of identity that Sligh began, adding evidence to the confusion we encounter in our search for an identity.

Jeffrey Hoone (c) 1991
Jake in Transition from Female to Male Series, or,
Through the Mirror and What Clarissa Found There

About a year ago I went to a movie and found myself seated next to a twenty-something man and woman. They were talking about the movies they had each recently seen-he had seen Boys Don't Cry; she said she and a friend meant to go and see it soon. He started to tell his date about the movie, saying he didn't want to give away the plot but that the main character gets raped toward the end of the film. She dutifully winces. 'No, but see, all through the movie you just think it's a guy, you never think it's a woman, and then there's this rape scene, and I could not watch a guy being raped,' he explained to his date. I was dumfounded, waiting to hear what I expected, from either of them, that they couldn't stand to see a woman raped on screen, either. But neither one seemed to really hear or mind what he'd said; she agreed and quickly decided that it was no longer a movie she wanted to see.

I don't know where it comes from, this gender thing, the association of particular behavior, good and bad, with one's biologically assigned sex. Men rape but are not raped. Women are naturally the victims. Men like being men and women like being women. It's God's will. But what if gender isn't a given? What if it's chosen?

'Any FTM [female to male] will tell you that we basically live in front of the mirror when we're first transitioning…It is indescribably gratifying to finally see that the image in the mirror reflects the image of myself that I've always carried inside.' 1

Jake's own complicated disassembly and reassembly brought Clarissa Sligh along for the journey as she documented the transition from Deb, a lesbian, to Jake, a heterosexual male. Jake, a sculptor whose early artwork includes a barbed wire enclosure, asked Sligh to photograph him; but what did he believe the photographs would show? What can they show? In fact, Sligh's camera is Jake's public mirror, his enduring affirmation that he is becoming what he believes he is. A man. Male. After all, he's starting to look like one.

Maybe Jake initially thought that a photographer just composes the frame and snaps the shutter. But Jake chose extremely well. As an African-American woman raised in the South during the Civil Rights Movement who was then living in a small town in North Texas, Sligh agreed to photograph the sex change of a white man whose parents, upset over his imminent transformation, tell him they 'felt [they] were willing to accept or could take almost anything except [his] bringing home a black.' Well, guess who's coming to dinner with her camera?

A few years earlier Sligh had begun to explore the concept of 'maleness' in a series about her father. Like most of us, she had assumed that someone like Jake who had himself endured the lonely agony of carrying around a 'deep, dark secret' would be sympathetic to someone else not of the cultural mainstream. How can a transgendered person be misogynistic and racist? And who would choose 'the enemy' or 'the unknown' to trust with the intimate details of one of the most important passages of one's life? Who confronts their fears by making those fears visible through the eyes of someone with whom he feels uneasy, with whom he has no connection? Or doesn't he?

Breasts get cut off, nipples are remade, every ten days (for the rest of his life) testosterone is injected, body hair grows, voice cracks, silicone balls are inserted, a penis is constructed, the silicone ruptures-Sligh is present for all of it, and her photographs take us through that frequently painful journey, and yet the hard part is not physical. As Jake's body changed, did Jake? Legally he has-he looks and sounds like a man, so why confuse the folks in the bathroom up at work? Yet he becomes more of a stereotype, the kind of man who desperately needs to get in touch with his feminine side. Normal as a man; didn't work as a woman. Jake seems happy; we're kind of stunned. What does being a man mean to him?

Eventually Sligh included her own journal's words and self-images in the visual construction of Jake's story. By participating as both documentarian and as doppelganger, Sligh complicates his process, actually and metaphorically, reflecting Jake's fears and triumphs through her own transformation from hired observer to visibly affected. What the viewer ultimately discovers through Sligh's work is that the photographs aren't so much about the process of changing genders, or of visualizing desire, but of coming to terms with difference. His and ours. It isn't always what you think it should be.


Clarissa Sligh lives in New York City and participated in Light Work's Artist-in-Residence program, for the second time, in January 2000.


Carla Williams is a photographer and writer who lives in Santa Fe, New Mexico. She participated in Light Work's Artist-in-Residence program in 1994.
Un/Common Threads