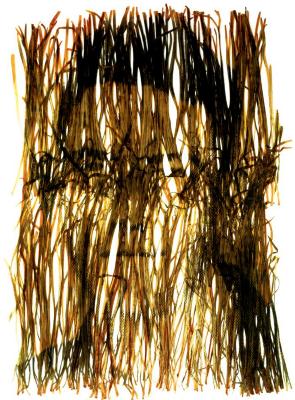 Binh Danh (MFA Stanford; BFA San Jose State University) emerged as an artist of national importance with work that investigates his Vietnamese heritage and our collective memory of war. His technique incorporates his invention of the chlorophyll printing process, in which photographic images appear embedded in leaves through the action of photosynthesis. His newer body of work focuses on nineteenth-century photographic processes, applying them in an investigation of battlefield landscapes and contemporary memorials. A recent series of daguerreotypes celebrated the United States National Park system during its anniversary year. His work is in the permanent collections of the National Gallery of Art, the San Francisco Museum of Modern Art, The DeYoung Museum, the Philadelphia Museum of Art, the Center for Creative Photography, the George Eastman Museum, and many others. He received the 2010 Eureka Fellowship from the Fleishhacker Foundation, and in 2012 he was a featured artist at the 18th Biennale of Sydney in Australia. He is represented by Haines Gallery, San Francisco, CA and Lisa Sette Gallery in Phoenix, AZ. He lives and works in San Jose, CA and teaches photography at San Jose State University.

When we die, our bodies may be buried, cremated, or embalmed, yet the age-old question of what happens to our soul after death remains.  Across cultures throughout the centuries, death has consistently inhabited a space that invokes both mystery and profundity.  Through explanations of salvation or reincarnation, varying responses to what happens to the immaterial spirit continue to invoke either dogmatic or open-ended answers amongst us all.  Although our physical form may wither away to carbon and dust, we still don’t really know what happens to the essence of ourselves—the accumulated memories, the aggregated experiences, the stored up activities and behaviors that helped to define each of us as individual beings.

Binh Danh has gained prominent recognition for his unique method of developing images in plant material by harnessing the power of sunlight to exploit the natural process of photosynthesis to produce his pieces, letting the sun do its work in the same manner a darkroom enlarger would.  It sometimes takes weeks or months for images to emerge, depending on the specific properties of the leaf or grass that he uses as canvas for a particular piece. Once the desired contrast is achieved, he immerses the plant material into clear acrylic resin, freezing the image in time as specimens to be viewed and contemplated.

Danh is part of a generation of Vietnamese who came to this country in the aftermath of the Vietnam War.  He came to the US as a child with his family in the 1970s, and returned to visit Vietnam only several years ago as a young adult. Like many born during and after that era, the Vietnam War is a distant memory, highly mediated through history textbooks and mass media.  Yet, by directly seeing and walking on the landscape of his birth country, Danh could intimately comprehend history on another level—the brutal legacy of war and the thousands of individuals, both Vietnamese and American, who perished on that land.  What happened to the physical bodies is harrowingly undeniable—mass graves, rows of body bags, corpses strewn on country roads.  Yet the question of where the spirits of these people went remains in the world of the enigmatic and unknown. It is through his work that Danh approaches these inexplicable questions.  He positions a visual world that wonders if the land could serve as witness to the passing of life, to the transit of souls—if the landscape could literally absorb the essence of those who died upon it, compelling those of us still here to remember and bear witness to the unseen passing of lives.  The imprint of war becomes physically manifest.

Danh’s significant body of work dealing with those who perished on both sides of the war does more than simply memorialize and pay respect to the dead—it raises a number of questions about the nature of life and the possibility of afterlife.  In his new series, he combines his own childhood memories of the Swamp Thing 1 within larger themes of death and resurrection.  The Swamp Thing centers around the story of scientist Dr. Alec Holland, who was working in the Louisiana swamps on a bio-restorative formula designed to promote crop growth and end world hunger.  After an explosion covered his body with burning chemicals, Holland escaped from the laboratory and fell into the waters of the swamp.  His chemical-covered body decomposed and was ingested by the plant life in the swamp, which subsequently developed sentience and began not only to resemble Dr. Holland’s body as a hideous, humanoid plant creature, but also to possess his memory and personality. He was no longer a human who had been turned into a plant, but rather a plant that had tried to become Dr. Holland.

1. First introduced as a comic book character in the early 1970s by DC Comics, the Swamp Thing became the focus of a long-running horror-fantasy comic book series of the same name, as well as two full-length films, a live-action television series, and a short-lived animated cartoon series.  A moderate collection of merchandise was also produced for the cartoon and television series, including action figures, stickers, and a board game, which Danh began to collect along with movie posters and issues of the comic book series.

Kevin B. Chen is an artist and curator living in the San Francisco Bay Area.  He is the program director for visual arts at Intersection for the Arts, one of the oldest alternative non-profit art spaces in the country.