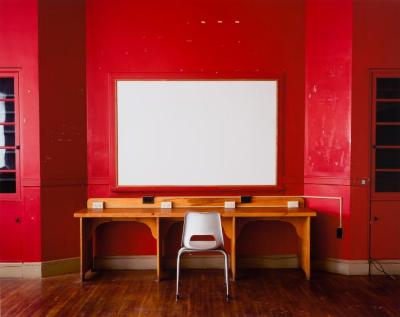 Meggan Gould’s series Verso, a compendium of images of the backs of personal and found family photographs, offers up the photograph as a palimpsest for imagined narratives. The viewer never sees the front side of the vernacular photograph, just the residue of that object’s journey through time—abstract traces of adhesive which used to affix the photograph to an album page, markings from the photo lab that printed it, or written notations by the original maker identifying what we might see on the reverse if given the opportunity. With each new viewer, it is as if the slate were wiped clear for a new layer of interpretation or imagined history.

Verso began when Gould inherited an album of photographs from her grandmother. Many had come loose from the pages, and the artist found herself looking at strangers. These relations who were unknown to her were unidentified on the album pages or on the reverse side of the photograph. This was a marked contrast to Gould’s mother’s ritual of carefully annotating each family photograph on the backside in the same location, in the same hand, and with the same class of data (who, where, when). The act of flipping each photograph in search of information interested Gould. It suggested that the photograph withholds as much information as it gives. To test the idea, Gould sought out family photographs from antique shops, flea markets, and the collections of friends and students. The source material has radiated further and further from her nuclear family to become an unlikely gathering of faceless portraits.

The anonymity of both the hidden subjects and the found photograph’s maker is significant to Gould’s project, a characteristic she emphasizes by obscuring the image from us. We can speculate that what appears on the front side of these photographs is likely both milestones (such as birthdays, weddings, and family vacations) as well as the most mundane moments of a personal history. But we will never catch a glimpse of what for the original maker and possessor was a memory made real and tangible.

Roland Barthes famously wrote in Camera Lucida about the nature of the photograph and its ability to evoke memory and the specter of death by analyzing a portrait of his mother. Interestingly, though Gould’s vehicle is the family photograph, the project is not a meditation on relationships or humanity in general. Rather it is an open-ended narrative that invites the viewer to complete the story. When there are enough cues that extend the invitation, that is.

In most images, the aforementioned traces—the adhesives, the hand-written descriptions or dedications, discolorations from age—do not pique the viewer’s curiosity about what is on the flip side. Texts such as “a year or so later” or “can I take it,” for example, are too generic or cryptic to lure the viewer. Gould’s approach is a more detached, clinical, almost anthropological consideration of the photograph as a cultural artifact. Her photographs deny us any illusion of intimacy with or connection to the personal history that transpired to result in the photograph before us.

The photograph is approached as a three-dimensional object, not a two-dimensional representation of an individual at a particular moment in time. Gould lights and photographs the picture backs in order to emphasize their “objectness.” To scan them would result in images too flat to be convincing. In the digital age, the photograph as object, and the album as a collection of those entities, risks extinction. They are “relics” of what Gould calls the “pre-pixel age,” when photographs were actual, concrete things to be experienced in the flesh, not just virtually. If Gould’s series is a lament, it is for the loss of the photograph as an artifact of modern society.

Gould’s project brings to mind Vik Muniz’s own Verso project. Muniz’s witty recreations of iconic images in chocolate, dust, or detritus have long challenged the presumed veracity of the photograph. In his series, Muniz painstakingly recreated (with the help of experts in various fields) the backs of painted masterpieces. Where Gould’s are photographic reproductions of vernacular photographs, Muniz’s are three-dimensional facsimiles of masterworks in paint (or iconic images from the newspaper age, another dinosaur in the history of print).

Any series based on the verso of a picture inherently asks why these images are compelling. They are not beautiful in any conventional sense. They are almost anticlimactic in what they offer. Like a cliffhanger, they tease us and allow us no resolution to the impending narrative we know must occupy the side hidden from view. In Gould’s work, they mock the very notion that a photograph can represent a reality. Hers are photographs of photographs, and her practice is photography about photography. Yet the representation before us is not a familiar image but a reversal of our normal expectations.

Meggan Gould is a visiting assistant professor of Photography at Bowdoin College in Maine. She was a Light Work Artist-in-Residence in May 2009. Visit her website at www.meggangould.net.

Laura Addison is the curator of contemporary art at the New Mexico Museum of Art in Santa Fe.