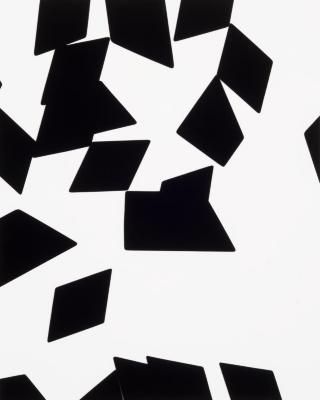 James Welling's work centers on an exploration of photography, shuffling the elemental components of the medium to produce distinctly uncompromising results. During his career, Welling has experimented with different photographic mediums, including Polaroids, silver gelatin prints, photograms, and digital prints, exploring the tensions of and between representation and abstraction. This dramatic print comes from Welling’s abstract explorations from the 1980s, reproduced by the artist himself as a one-of-a-kind silver gelatin print exclusively for Light Work. Welling has had solo exhibitions at Künstnernes Hus, Oslo, Norway; Musée départemental d’art contemporain de Rochechouart, France; Regen Projects, Los Angeles, CA; and David Zwirner Gallery, New York, NY, as well as a touring retrospective with the Wexner Center for the Arts, Columbus, OH. His work was included in the Metro Pictures inaugural exhibition and featured in the 2008 Whitney Biennial in New York. He has also exhibited in group exhibitions at the Whitney Museum of American Art, Museum of Modern Art, and the Metropolitan Museum of Art in New York. Welling participated in Light Work’s Artist-In-Residence Program in 1986.

What is it? This is most likely the initial question posed by someone viewing Jim Welling's photographs for the first time, and also one of the central issues about photographic representation that he is interested in investigating.

The very notion of a photograph is that it requires a subject and the 'subject' in Welling's photographs is the procedure from which the image is constructed; folding, tearing, scattering or arranging. By photographing crumpled tin foil or black gelatin Welling creates the illusion of representational photographs by using abstract means. The use of this procedure enables the artist to very clearly exaggerate the tension that exists in all photographs between the real and the imagined in order to point out that the very nature of photographic representation always gives way to uncertainty.

Welling lives in New York City, has exhibited and published his work extensively and was awarded a photography fellowship from the New York Foundation for the Arts.