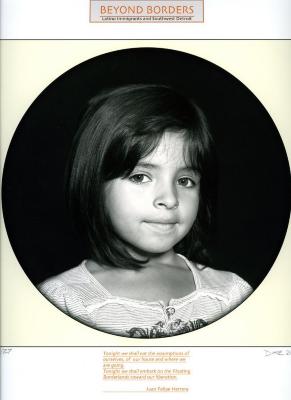 GenderMale
Light Work RelationshipDonation, 2014 (by The Society for Photographic Education)

Beyond Borders; Latino Immigrants and Southwest Detroit is a series of portraits intended, first and foremost, to celebrate, empower and pay homage to the Latino immigrant.

As the proud son of a migrant worker, I continue to be concerned with how Hispanic immigrants are portrayed publicly and politically in mass, as illegal, undocumented and alien. During state and national elections and for the perceived benefit of the politician, the “immigrant problem” is used to inflame and in a manner that is intended to systematically deny the individual immigrant’s identity. It’s simply safer that way because when we begin to identify with the immigrants, we begin to understand the inhumanity imposed upon these people! Throughout this countries history, when economically advantageous, we have welcomed and indeed recruited the immigrant but when they are no longer needed and with great spectacle, we deny that welcome. One author referred to this phenomenon as an American policy of “in the back door and out the front.” I see the Mexican/American border, the wall, the river and the desert, as a symbol of the demarcation between desperation and hope. My intent is for the faces, in these portraits, to read as a road map of the individual immigrants experiences, their unique set of circumstances and the story of their “journey” from the border north.

These portraits are then my attempt to individualize and unmask the identities of the people of this community. This work was made in collaboration with Latin Americans for Social and Economic Development (LASED), was funded in part by a 2010 Kresge Foundation, Community Arts Grant and supported by the MAC Group.