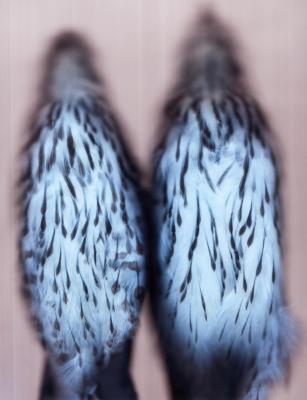 Ann Hamilton is a visual artist internationally recognized for the sensory surrounds of her large-scale multi-media installations. Noted for a dense accumulation of materials, her ephemeral environments create immersive experiences that poetically respond to the architectural presence and social history of their sites. This image comes from the common S E N S E, a current exhibition at Henry Art Gallery. Using materials and representations of animals, Hamilton creates an elegiac accounting of the finitude and threatened extinctions we share across species. She asks: “How are objects—once animated by a living context—re-animated in cultural imagination, as we recognize the reach and the limits of our hands to touch and our voice to call?” Born in Lima, Ohio, in 1956, Ann Hamilton received a BFA in textile design from the University of Kansas in 1979 and an MFA in sculpture from the Yale School of Art in 1985. Hamilton has served on the faculty of The Ohio State University since 2001, where she is a professor in the Department of Art. Hamilton represented the United States at the 48th Venice Biennale and is a recipient of the MacArthur Fellowship. Hamilton premiered her video piece, table, at Urban Video Project (UVP) in April 2014.

Can the weight in the touch of a percussionist’s hand be visualized? How can a recording reveal the many subtle actions that bring forth musical virtuosity? What is the space between hearing and seeing, and how do we—the viewer-hearers—occupy this space? Inspired by the variety shows of his youth, composer David Lang envisioned a nearly impossible synchronization of two percussionists when he originally wrote the composition, “Table of Contents”. After seeing a performance in 2011 by percussionists Susan Powell and Joseph Kryger, who were the first to perform the work as Lang originally envisioned, Hamilton imagined attaching an array of low-resolution mini surveillance cameras to the hands of the percussionists and instruments. In the resulting video piece, Hamilton’s table, the cameras occupy the gap between hearing and seeing, and the edit generates a counter rhythm, a back-and-forth that brings us intimately into “impossible” virtuosity.

(Please note that the title of Hamilton’s piece, which originally appeared as table of contents, was shortened to table at the request of the artist to further distinguish it from Lang’s composition.)