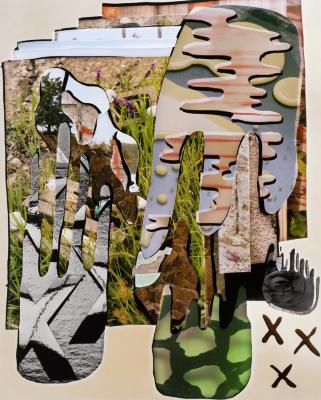 Dan Boardman is a visual artist living in Gloucester, Massachusetts. He was born in Ontario, California, and grew up in Central New York. He is a 2013 Massachusetts Cultural Council Artist Fellow. His work has recently been exhibited at The Bakalar & Paine Galleries in Boston, MA; Harvard University in Cambridge, MA; and The Mills Gallery at The Boston Center for the Arts, Boston, MA. His publishing company, Houseboat Press. has recently exhibited at The Aperture Gallery in New York City, New York and at Off-Print in Paris, France.

Dan Boardman’s recent analog photo “collages” are striking both for the ways in which they seem to reach out to the broader aesthetic history of the 20th century and for the aggressively restrictive parameters of their process. Made entirely in-camera using hand cut masks on 4x5” and 8x10” negatives, a single image may be the composite of as many as two hundred separate exposures. They begin with drawings that combine organic abstraction, figuration, iconography, and text. The drawing acts as an overall compositional template that he traces onto acetate and then cuts into masks for separate exposures within a single frame. These masked shapes create distinct zones of photographic texture, space, and imagery that intermittently complement and compete with one another. Pictorial legibility emerges across images even as it is simultaneously undermined by chaotic variety and jarring juxtapositions.

Boardman’s photographs have become increasingly complex as his process has evolved. The artificial, closed ecosystem of Biosphere 2 that he takes as one of his subjects might also be an appropriate metaphor for his practice, which has abandoned some of the traditional studio methodologies that seem more related to the kind of natural selection that takes place in the wild. He upends the standard practice of shooting hundreds of exposures and then culling the weakest images to find the few strongest images. By funneling multiple exposures onto a single negative, Boardman essentially puts all of his eggs into one basket. The resulting photograph’s success is largely a matter of setting up compositional structures and boundaries that will allow chance visual encounters to bolster and complete one another. This method wagers that what takes place, unseen, within the sealed chamber will add up to a new visual whole that can be used to inform and evolve the process from image to image.

One could argue that Boardman could arrive at these images digitally, using a process that would allow corrections, edits, and curation at every stage. But for Boardman, it is the process that completes the narrative of the work, and the labor-intensive, more or less “blind” method of making these images that allows them to embody ideas of chance and intuition, and inverts the concept of photography as a prosthetic for memory. In Boardman’s images, memory must come to the aid of the photographic process. During the weeks of masking and shooting multiple exposures, at different times and locations, a single, final image exists only as memories of parts attempting to fit into an imagined, future whole. When processed, the completed image will undoubtedly have accrued along the way a significant amount of the incidental, now inextricably intermingled with the intentional. Allowing chance and intention to have an equivalent and reciprocal relationship, this process links these images to earlier Dada and Surrealist strategies for tapping into the unconscious as a source of visual invention.

“The ‘law of chance,’” Jean Arp wrote, “can be experienced only in a total surrender to the unconscious.” Boardman’s process, subject matter, and the resulting photographs seem to strive toward this “surrender,” and while many of the shapes and forms that emerge in his images also appear to have a pictorial affinity with certain Surrealist and Dada artists (André Masson, Yves Tanguy, Jean Arp), the “unconscious” that Boardman surrenders to is distinctly contemporary and American. The psychology in his photographs is that of an America after space-travel, collectively aware of fragile ecosystems and scientific evidence pointing toward potential planetary catastrophe, yet equally fixated on the more individualized (and entrepreneurial) “science” of self-improvement, laid out by business-savvy self-help gurus like Stephen Covey, author of The Seven Habits of Highly Effective People. Boardman often buries these subjects under dense visual arrangements. The occasional appearance of legible text and iconography guides our navigation of less obvious narrative elements moving through his work, and it reiterates the declaration that these images are not merely formal experiments.

Dada artists were reacting to what they perceived as overbearing and potentially destructive systems of logic and reason of their day. Chance, intuition, and the absurd were offered as possible solutions. In much the same way, we can see Boardman’s process and the resulting images in part as an exploration of alternatives to a cultural landscape increasingly saturated with software and algorithms that at every step attempt to predict our preferences based on past decisions. In this contemporary context, a studio practice that engages Arp’s “law of chance” allows an opening for fresh artistic discoveries to enter, random visual mutations that retain some autonomy from their precedents and thus expand, rather than repeat, Boardman’s visual sensibility.

Sean Downey is an artist living and working in Boston, MA. www.seandowney.net

Dan Boardman lives in Gloucester, MA, and completed his residency in August 2015. www.dbboardman.com