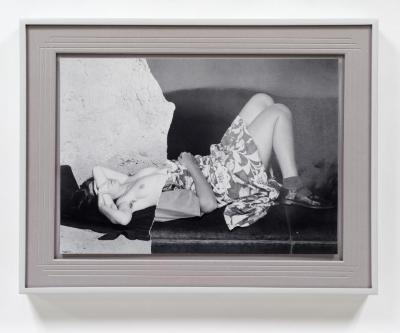 Gideon Barnett’s exhibition After Edith brings together a collection of images that he produced by documenting vandalized photography books found in public libraries. The project began in Miami, Florida, with the discovery of a copy of Emmet Gowin’s Photographs in which the iconic nude portraits of Gowin’s wife Edith had been defaced by prurient library visitors. Parts of the images had been cut with a razor blade and, in some instances, entirely torn out of the book. This deliberate removal of “provocative” imagery and the psychology of what may have sparked such an act fascinated Barnett, and prompted a closer look at the visual by-products. He was drawn to the way in which the cuts open through to another image, for example, or how the tearing of a page can create a compelling juxtaposition of photographs. “I’m interested in the generative potential of this vandalism,” explains Barnett, “and how the act of reframing it with a camera can transform its meaning.” The vandalized images are unquestionably interesting and beautiful when taken out of context and framed on the wall, yet all together Barnett’s photographs also point to disconcerting fearful, destructive, or even violent intentions behind them.

Some librarians would attempt to mend the most heavily vandalized titles by pasting inky black-and-white photocopies of the original pages back into the books. These replacements, reminiscent of smudged charcoal drawings, were equally intriguing to Barnett, so he physically removed the sheets of paper and collected them along the way as a counterpart to the photographs he was making. In his exhibition at Light Work, Barnett displays the photocopies as unique objects, pinned by small magnets into playful forms onto pieces of chalkboard. Their sculptural shapes highlight their physicality and presence. In a sense, they are confessions of his own vandalism, a participatory act that informs the way in which we might read the rest of his work.

Barnett notes the ways in which the quiet space, the expectations and pressures within a library setting, seems to prompt certain defiant behavior, acts of theft and perversion. He notes a history of such acts in libraries and the fact that it is not localized, but widespread. Within a nearby library here in Syracuse, for example, there is in fact a copy a Sally Mann monograph that visitors have thoroughly altered. The book includes naked portraits of the artist’s children from the loving perspective of a mother, the work that Mann is perhaps most known for and which has been engulfed in controversy—images that some have seen as beautiful or loving are problematic or inappropriate to others. If one were to search for it on the shelves at this particular library, one would struggle to find it where it belongs. It’s now kept behind the desk of special collections, with a dedicated reading area to prevent more pages from being altered or taken.

As his fascination with the subject continued, Barnett visited libraries across South Florida and discovered a number of books that had been altered in a variety of ways, and his collection of photographs grew to include traces of more well-known images and artists spanning the last century of photography, from Edward Weston to Gregory Crewdson. Though the many reference points within the medium of photography are certainly interesting to see, After Edith aims to consider larger cultural and political concerns of censorship and human nature. Barnett’s project speaks about many complex topics, which would each require their own essay to fully unpack. The work questions the taboos of nudity, sexuality, and human intimacy in America—sharp contradictions within a culture where most popular media and advertising is saturated with sex. The images can also point to a problematic history of women’s roles in photography, as well as to film theorist Laura Mulvey’s notion of the “male gaze,” positing that in film (or photography) women are typically the objects, rather than the possessors, of the gaze. Interestingly, the cutouts and torn pages, once stuffed into a pocket and taken away by the vandal, become further objectifications of the subjects in the photographs. What remains on the page is a reflection of the act, and at the same time its own image. We can also view these photomontages through the history of Dadaism, its subversive ideals and chance-based procedures, as Barnett makes art of unintentional and anonymous creations and found materials.

It’s particularly suiting that these images would find their way back into the pages of a book, as an issue of Contact Sheet. Alongside Barnett’s photographs we have reproduced a few of the photocopies, in the spirit of the original inserts that he had found. Many copies of this publication will soon live on the shelves of libraries across the globe, where their discovery will now open a dialogue about the private and public consumption of imagery. While there are a multitude of ways to approach and consider Barnett’s work, his images do not fail to cause an immediate and personal response. Through a thoughtful combination of photographs of vandalized book pages and the found photocopies, Barnett simultaneously recounts that what the viewer brings to the image determines so much of what a photograph signifies.