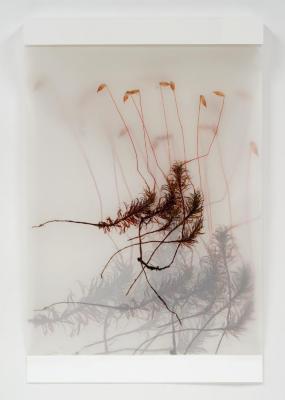 The recipients of the 42nd Annual Light Work Grants in Photography are Robert Knight, Lida Suchy, and Marion Wilson. The work of all three photographers evidences a deep commitment to long-term study. Sensitivity to time and a focus on duration guide the work of these photographers.

In Robert Knight’s series, In God’s House, the photographer studies the entanglement of architecture, space, and religion. Docu­menting sites of worship, usually during service or prayer, Knight shows how the occupants of a space determine its meaning and understanding, oftentimes different than its origi­nal design and intent. As demographics shift, the new occupants repurpose the use of these religious spaces, as in the instance of a Euro-American Baptist church that has thrived by welcoming refugees from Burma. Or they may accommodate another faith, as an Episcopal church’s conversion to a Buddhist temple, or an historic Catholic church’s conversion to a mosque. The long exposure time in Knight’s photographs creates motion in his images that is both cinematic and ghostly. We can trace the outlines of worshippers praying in Jummah Prayer, Grand Mosque, Rome, Italy, but the blur implies a spirit leaving or entering the space and mingling with its worshipers. Even the photographs with only a few worshipers share this quality: in Sunday Mass, Saint-Germain-des-Pres, Paris, France, there is a haunting absence in the cerulean light that creeps along the walls.

Lida Suchy is a former Light Work Artist-in- Residence and 2016 Guggenheim Fellow. Her Portrait of a Village: the People of Kryvorivnya, Ukraine documents the warping and passage of time in the small West Ukrainian village in the region her family was forced to leave during Stalin’s regime. After the fall of the Iron Curtain, Suchy returns to the land of her family, fifty years after her parents’ escape, to photograph the 2,000 villagers and forge a long-term project that has now spanned two decades. Suchy photographs with an 8 × 10 inch view camera. Her labor is apparent: the patience and quietude of her portraiture convey genuine connection and collaboration with her subjects. In one such photograph, two children posing with their horse in the polonyna (pasture) face forward, greeting the camera with familiarity and comfort. This image seems to have a rightward slant, but the child atop the horse sits centered and upright, almost straightening the composition. In another photograph, taken last summer, Suchy captures the local Kryvorivnya priest, Father Ivan, and two pilgrims who have come to a forest site in the Chorno Hora Mountains where they believe the Virgin Mary has appeared. Though they do not engage with her camera, we can sense Suchy’s presence is welcome as she takes in this intimate and deeply spiritual scene.

Photographing moss, the first plant form, Marion Wilson celebrates deeper ways of seeing that look to more respectful engagement with the greater environment. Formerly a painter, she applies gel to mylar; the ghost of this image is visible beneath her large- format, translucent photographic prints of an organism so small it survives only on dew. Interested in botany’s scientific and metaphorical attributes alike, Wilson studied for over a year with bryophyte expert Dr. Robin Wall Kimmerer. But her durational efforts expand beyond the gallery and outside the lab. She started MossLab/The Mobile Field Station—a renovated RV—and drove it from Syracuse, NY, to Miami, FL, col­lecting moss specimens and setting up “first looking encounters” along the way. Wilson invites viewers to pay attention to the over-looked timelessness and omnipresence of moss in a project that parallels her social practice of working with marginalized neighborhoods and populations. A place of democratized looking, the viewing space and lab become one.

The projects of Robert Knight, Lida Suchy, and Marion Wilson all span a great deal of time. Each presents an enduring and committed effort to observation and connection, displaying how communities—and in Wilson’s case, life forms—grow and develop.

Sean D. Henry-Smith is a poet and photographer intrigued by the intersections between these art forms.  He is a recipient of the 2017 Poets House Emerging Poets Fellowship and Lucas de Lima selected his first chapbook, Body Text, for the New Delta Review 2015-2016 Chapbook Competition. His words and images have appeared in Apogee Journal, FACT, Tagvverk, The Offing, and The New York Times. www.seanhenrysmith.com