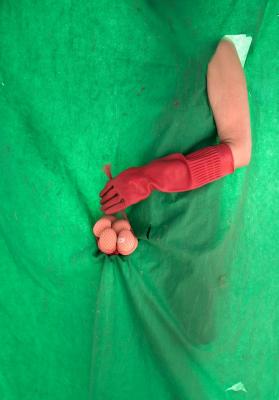 Cristina Velásquez (Colombia) is a visual artist working mainly with photography and paper weavings. Her work investigates representation and translation in the context of transcultural relationships —both as mechanisms for oppression and silencing, as well as powerful tools for connection and resistance. She is interested in the way one culture translates another, and how inevitably, a dominant culture sanitizes and reduces the other in a subtle, and not so subtle, continuity of colonialism. Similarly, Velásquez explores the ways social constructions of value, such as, race, class, and labor distribution, are shaped by images and language, echoing a larger system of power and exchange that goes beyond borders and nationality.

Cristina Velásquez (b.1985, Colombia) received an MFA degree in Advanced Photographic Studies from Bard College and the International Center of Photography (New York, 2017), where she was awarded the ICP Director’s Scholarship. Most recently, Cristina was selected for the 2019 Light Work Artist-In-Residency Program, received the Carol Crow Memorial Fellowship (HCP), and the LOST II Book Award from Kris Graves Projects. Cristina was also recognized by the Women in Photography (WIPNYC) Grant and Mentorship Program, and the 2017 Baxter Street Camera Club of New York, Annual Competition. Cristina is a Curator for New Poetics of Labor, and has taught in State University of New York, The International Center of Photography, and the Houston Center for Photography. Cristina’s work has most notably been exhibited at Museo de Antioquia, ICP Museum, Houston Center for Photography, and City University of New York, among other galleries and private institutions. Cristina’s first monograph, Viterbo, was published by Kris Graves Projects in April, 2019; and her publications, Al camello camello y al amor amor, Montañera, /100, and One way of letting go, are part of the collection of the The International Center of Photography Library (New York).

Cristina Velásquez’s photography plays with nature, technology, and the body in order to address deeper questions about labor and identity in Latin America. Velásquez’s compositions build on and react to visual tropes that emerged from centuries of colonial imagery. From the 16th century, images of nakedness and an imposing tropical nature have saturated representations of Latin America. These images have embedded in nature and the territory itself stereotypes of its inhabitants as backward and ahistorical. Velásquez inverts these tropes in vivid depictions of Latin American identities. Instead of precariousness, nudity becomes a sign of intimacy, connection, vulnerability, beauty, and, ultimately, humanity. Bananas and plantains—long associated with backwardness and imperialism from the "banana republics” to Carmen Miranda—appear in her work as extensions of the body. In some images, banana leaves cover human heads (Leaf hats), and in others they turn into hands and toes. Her photographs rescue the landscapes of an agrarian society in which the rhythms and dynamics of social life have been bound to the production of commodities, as coffee or bananas, in sometimes excruciating working conditions. Humans create the conditions for the production of these fruits, but these fruits also define people’s activities and even their lives. Velásquez’s work engages these relations of mutual dependence and moves away from the usual victimizing narratives. Rather than being passive victims, people have transformed these landscapes of labor, constantly scarred by violence and coercion, into homes and shelters (Angélica).

Human bodies figure prominently in Velásquez’s work. These are hybrid bodies, organically combined with nature, synthetic materials, and tools. In her photography, nature is not an obstacle to tame nor is technology a medium for domestication. Both are extensions of the body; they are as natural as they are social. They represent, replace, complement, and mimic each other. The body––full of life’s marks and traces––is inseparable from synthetic and organic elements. In the deeply personal image, Los huevos en mi casa los puso mi mama, the green fabric mimics nature, the red glove replaces the hand, and the eggs become a metaphor for household economic responsibility, possibly even evoking an absent male body. In this composition, as in De nosotros para el mundo, the artist carries on a playful dialog between the photographic studio, the portrait, and other artistic media through her use of synthetic backgrounds and her attention to the human figure. They may be framed as portraits, but these compositions also remove the studio to everyday rural settings. Isolated limbs frequently replace faces in stylized, almost sculptural arrangements. Sometimes people stand behind a curtain, barely visible, exposing small fragments that pique our curiosity.

One can almost see the artist at play. Her compositions invite us to reflect upon the interaction between artist and subject, suggesting a relationship with performance. Fully complicit, the artist and those photographed have together constructed a single image. Velásquez may compose a scene, but her subjects also tell their own stories through the pictures. Through this dialogue, Velásquez’s compositions reveal a deeper inquiry into the complexities of Latin American identity. As a Colombian artist trained in the United States who shows her work in both places, Velásquez must navigate a context in which representations of Latin American identity are fraught with power. She engages the politics of depiction, displaying, and viewing by complicating the relationships between who is being described, who depicts, and who looks. The sitter is a composer and the composer is, in a way, a sitter. Both are creators and performers, composing and being represented in these portraits of identity. For this reason, it is not easy to consume or classify Velásquez’s representations of Latin America. Neither the continent’s peoples nor its geographies are readily at the viewer’s service. They are slippery, furtive, human, and resilient.

In sum, Velásquez’s images undermine old dichotomies about the continent’s identity in terms of tradition versus modernity, as well as in terms of a pristine indigenous culture versus a foreign European elite. Instead, she reveals a popular culture that includes modern elements, such as a Sony radio or industrial fabrics, which are part of global economic networks and local cultures alike. Far from the ahistorical beings that colonial imagery depicts, Velásquez creates a panorama of something closer to what Nestor García Canclini terms “hybrid cultures,” which oscillate between tradition and modernity, creating a rich world of contrasts and uneasy combinations. This non-essentialized and expansive view of Latin American identities is precisely what comes alive in Cristina Velásquez’s work.

Santiago Muñoz Arbeláez is assistant professor of history at Universidad de los Andes and a founding member of Neogranadina (neogranadina.org/en). He lives in Bogotá, Colombia. www.santiagomunoz.neogranadina.org

Cristina Velásquez divides her time between New York City and Houston, TX. She completed her residency at Light Work in April 2019.