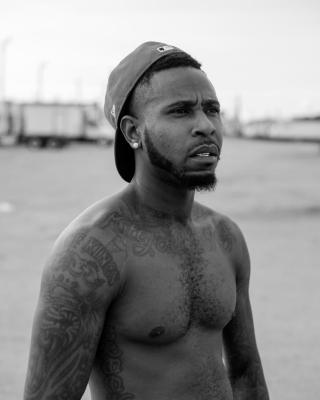 For a more recent CV or bio please visit the artist's website, www.zora-murff.com

Zora J Murff is a Visiting Assistant Professor of Photography at the University of Arkansas. Murff received his MFA in Studio Art from the University of Nebraska–Lincoln and holds a BS in Psychology from Iowa State University. Combining his education in human services and art, Murff’s work explores how photography is intertwined with social and cultural constructs. His work has been exhibited nationally, internationally, and featured online including Aperture Magazine, The New Yorker, VICE Magazine, The British Journal of Photography, and The New York Times.

A photograph is a speech act, an utterance.

A sonic frequency accompanies every image, that wayward thing of sight occurring both in the mind’s eye and through our two eyes. With eyes closed, sometimes images speak the loudest. Pictures rising from that darkness can deafen, roaring even when whispering. What Tina M. Campt calls “listening to images” in her 2017 book of the same title is essential when seeking ways of seeing, opportunities to commune with what one “cannot articulate in words.” One could argue that some images surge forth from an initial failure, when words are just not enough, when language gawks, stumbles, jams, glitches. Images hold us through the ineffable. We listen to them. Searching beyond their stillness, we watch them move. A photograph is not solely a study of its subject in isolation, but of that subject’s sound and movement—the sounds made as things move and the moves making sounds that we wait to hear. These speech acts and the choreography they map trigger a spatial reckoning, an unfolding landscape that reaches far beyond the photographer’s frame.

The landscapes in Zora J Murff’s work center questions of biopower: the control and management of bodies and populations. Even when the body is not physically present, the contour of the body is there. Roads like scars where the notion of safe passageway remains core to an afterlife of slavery and legal segregation. Fencing that asserts an architecture, fictional fault lines, and boundaries, delineating plausible trespass. Windows that one might see through, which ordinary violence has rendered blind, privatizing the space within. Breaks within modular concrete barriers become wounds, entryways and exits that determine how bodies move, where we can and cannot go. These images slice and rattle and drill and wheeze.

Murff’s “in-between” gestures toward a-point and no-point. These are spaces meant to remain out of sight, therefore outside of white imagination. In-between and situated no-place and some-place, at the intersection of no-where and some-where, they insist growth, remix, innovation. A vine’s curling tendrils, the five ’clock shadow of verdure strips along an alley, gleefully spiteful in the face of targeted civic planning. Such creeping green—wild weeds that whistle and wander, trees that weep and tremble in the heat—feels anarchic, a quotidian refusal. Low-income areas within American cities are subject to higher temperatures than more affluent neighborhoods because they have fewer trees. Less green means less shade, which means the warming caused by climate change adversely affects communities of color. Such images resting “at no point in-between” underscore redlining’s fractal and insidious nature. Redlining emerges as an historical exercise in environmental terrorism, amplifying the hazard of social death by eroding sustainability within African American communities.

Where the body does appear in Murff’s photographs, we follow. There, the dappled suggestion of leaves rustle and shift in chiaroscuro, jet-black hair cascades in the breeze. A hooded sweatshirt, its painterly red reminiscent of Jan van Eyck, drapes across a peaceful frame, shrouded against a leafy backdrop. Here, a gold hoop earring’s orb and loosely arranged right-hanging plait lead us through the crossing arms of a figure staring back at us, breathing in tranquility. A smile simmers right below the surface of another figure, framed in lavender and lilac, eyes closed beneath expert eyeline, chin cocked up. A father’s lilting contrapposto as he holds his child. A boy, his ribs in stripes of shadow, one hand against his heart, carries a ball between hip and arm. The presence of these folks is poignant, poised, persistent. The space Murff makes for each figure to exhale, shift, size up the dude with the camera standing before them, is ecstatic. Murff has made this space in active resistance to what George Yancy and Janine Jones, in their 2014 edited volume, Pursuing Trayvon Martin, call the effort to “remov[e] black bodies from public spaces” in the name of “cleansing and invigorating the social body.” Murff’s subjects become cartographers as they move through their respective spaces, remapping and resituating their own belonging, occupying all at once a black past, present, and future, each proposing what that might look like.

Murff’s gorgeous utterances refute blackness-as-object. His images refuse what William David Hart called, in Yancy and Jones’ book, black American life as “postmortem event,” an anti-black premise that extends across visual culture by engaging black pain as both fetish and entertainment. The speech of these images—and those folks found within them as they find their voices—is resonant and lyrical. As speech acts, these images honor the presence, perseverance, and joy of black life that has made infinite worlds of no-points and all-points. In defense of such limitlessness, we find a blackness that expands, crackles, bangs, delights, challenges and pushes lines to their breaking point. Murff’s elastic in-between bends poetically, a refrain that rings.

Legacy Russell is a curator, writer, and artist living in New York City. She is the associate curator of exhibitions at The Studio Museum in Harlem.  www.legacyrussell.com