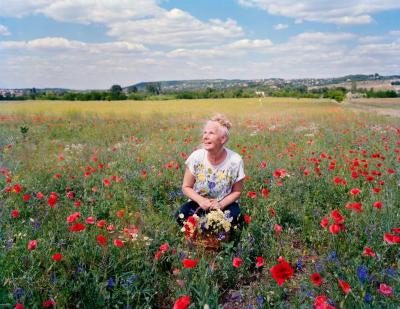 For a more recent CV or bio please visit the artist's website, http://www.rekareisinger.com

Reka Reisinger is a visual and historical archivist living in Burdett, New York. Reisinger graduated from Bard College (2004) and holds an MFA in photography from the Yale University School of Art. Reisinger was born in Budapest, Hungary, and returns frequently to photograph her homeland, the central focus of her work. Driven by a sense of urgency to collect visual cultural artifacts, she used her photographic practice to evoke the atmosphere she experienced during her frequent childhood visits to Hungary during the early post-communist era. Reisinger creates a sense of humor in her work while posing more profound questions about cultural identity during upheaval. She has participated in many group exhibitions nationally and internationally including The Camera Club of New York, The Center for Photography at Woodstock, Lisa Ruyter Gallery in Vienna (Austria), the Midlands Art Center in Birmingham (UK), The Sculpture Center in Long Island City, and the Swiss Institute in New York City.

The 45th Annual Light Work Grant recipients are Trevor Clement, Lali Khalid, and Reka Reisinger. Begun in 1975 and given each spring, the Light Work Grant is one of the oldest such fellowships in the US and spotlights our support and encouragement of Central New York photographers. Besides getting a $3,000 stipend, each winner appears in the fall season’s opening exhibition and in Contact Sheet: The Light Work Annual. The 2019 judges were Kimberly Drew (writer, curator, founder of Black Contemporary Art), Eve Lyons (photo editor, The New York Times), and David Oresick (executive director, Silver Eye Center for Photography).

Trevor Clement is a visual artist, musician, and performance artist in Syracuse. He combines photography with book art, installation, and sound. Clement’s sometimes gritty “aesthetic of no taboos” lets him remain open-minded in the face of orthodox photographic conventions of cleanliness, simplicity, and rigidity. He does see himself in dialog with three traditions: Japanese photography (Daido Moriyama, Masahisa Fukase), Western photography (Richard Billingham, William Klein, Nan Goldin), and more than forty years of hardcore punk and noise. He describes the untitled installation and individual images that comprise his grant project, DOUBLE HELL, as “how notes may combine to make a song or scenes in a movie.” Clement’s music projects include FAITH VOID, HUNTED DOWN, and WHITE GUILT, and he was a manager of the underground Syracuse music/art space, BADLANDS. He has exhibited locally at Spark Contemporary Art and across New York State, as well as at the Fotofanziner Fotobokfestival in Oslo (Norway), the NoFound Photo Festival in Paris, and the San Francisco Center for the Book. Clement also received a Light Work Grant in 2014.

“A lot of people like to make art about art,” said Clement. “I’d rather be taken on a journey outside of that world. I would be much happier with keeping the focus directly on the social, political, or aesthetic connotations of how my work is presented. This can still be oppositional, but I would prefer keeping the focus on what I do, rather than what I do not.” www.trevorclement.com

Lali Khalid is a visual artist living in Ithaca in the Finger Lakes. She holds a BFA in printmaking from the National College of Arts in Lahore (2003) and an MFA in Photography from Pratt Institute (2009), where she was a Fulbright Scholar. Khalid immigrated from Pakistan in 2011. Her work spans landscape, abstraction, and documentary photography, but centers on portraiture. She explores diaspora, identity, family, and home in her own life and in the lives of people she photographs. Her images depict cultural and private conflicts in the emotive effects of natural light. She has shown work in galleries across Europe, Pakistan, the US, and recently in Italy. Her photo essays have appeared in publications such as Art Now, Artnowpakistan, ArtAsiaPacific, F-STOP Magazine, Chasmjournal, and Saatchi Online. Khalid is an assistant professor of photography in Media Arts, Sciences, and Studies at Ithaca College.

“This work is about following. I follow myself with a camera and frame where I am,” she has said. “Through pictures of my family, personal journals, travels, and self-portraits, I document my personal experiences. The last couple of years have made me fathom and somewhat accept the difference others see. I have been in America since 2007, but somehow, I am still on the periphery, looking in. I am an outsider. Fighting the US legal system and recognizing what it means to be ‘the other’ has changed my approach to image-making.” www.lalikhalid.com

Reka Reisinger is a visual and historical archivist living in the Finger Lakes village of Burdett near Seneca Lake. She graduated from Bard College (2004) and holds an MFA in photography from Yale University School of Art (2007). A native of Budapest, Hungary, she still returns often to photograph her homeland. Reisinger uses a 4x5 camera to photograph her subjects in the midst of daily activities. She seeks to evoke a cultural atmosphere she experienced during childhood visits in the post-Communist era. In the serious, urgent, and “seemingly impossible task of documenting a moment recently passed,” Reisinger still finds humorous juxtapositions informed by her deep affection for Hungary. National and international group exhibitions include The Camera Club of New York, The Center for Photography at Woodstock, Lisa Ruyter Gallery in Vienna (Austria), the Midlands Art Center in Birmingham (UK), SculptureCenter in Long Island City, and the Swiss Institute in Manhattan, and a solo show at Real Artways in Hartford, CT.

“I had the opportunity to experience Hungary at a pivotal time in its history subsequent to its opening up to the West,” Reisinger says. “It was a unique period when antiquated traditions still persisted in the context of an increasingly modern world. I witnessed firsthand an era when women in my grandmother’s village still wore the traditional costume, a time before telephones and extensive highway systems, a time before shopping malls and mass media. Simultaneously, I observed the influx of Western culture and the Hungarian people’s varied reception and at times unusual interpretations of a lifestyle that was already familiar to me.” www.rekareisinger.com