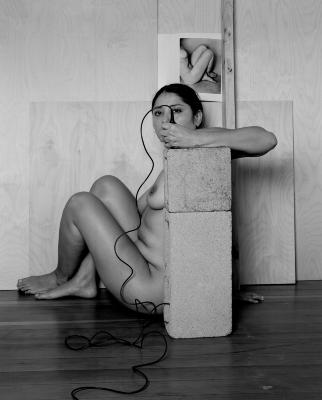 Tarrah Krajnak was born in Lima, Peru. She is currently based in Los Angeles. Krajnak was awarded the Lewis Baltz Research Fund Award presented to her at Paris Photo by Le Bal in 2021. She also won the Jury Prize of the Louis Roederer Discovery Award at Les Rencontres d'Arles, and is a 2020 recipient of the Dorothea Lange-Paul Taylor Prize by the Center for Documentary Studies at Duke University. Her first monograph of the project El Jardín De Senderos Que Se Bifurcan was published with DAIS books in May 2021 and was named by MoMA's as one of the ten best photobooks of the year. Krajnak is represented by Galerie Thomas Zander.

In Tarrah Krajnak’s Self-Portrait as Weston/as Bertha Wardell, 1927/2020, the photographer poses nude before a wooden backdrop: She positions herself on her left knee, holds a shutter release in her right hand, and brandishes a wooden square before her breasts and face. Stacked on the ground, three concrete blocks help support the square shield, also acting as a prop for Edward Weston Nudes (1977, 2005), the modernist’s book of photos of models Bertha Wardell and Charis Wilson. Krajnak has opened Nudes to an iconic photograph of Wardell, who, like Krajnak, balances on her left knee while her upper body extends skyward, only to be cut off at the ribs so that we cannot see her breasts or her face. Krajnak complicates Weston’s photograph by interpolating her brown body into the mise en scène, mimicking both the Anglo Wardell and Weston himself, and making the crops in Weston’s original photograph visible by symbolizing them with the wooden square.

Self-Portrait as Weston/as Bertha Wardell is part of Krajnak’s exhilarating Master Rituals. Krajnak, who was born in Lima, Peru, in 1979 and now teaches at Claremont’s Pitzer College, uses this series to enact a dialogue with the masters of modern photography through a constellation of interventions. These include redacting the text of Ansel Adams’ seminal Examples: The Making of 40 Photographs (1983), until original verses emerged:

concentration of spirit
planned mind on image
I confess
I wandered
into conjecture -- possible experiments.

Krajnak recited these lyrics while washing copies of Adams’ masterpieces, such as The Black Sun (1939), with her own, coffee-dipped hair until the prints reduced to blank spots. The Weston images—titled Master Rituals II: Weston’s Nudes—constitute this engagement’s second chapter, and reveal Krajnak playing with reenactments in the face of a double erasure: in works such as Self-Portrait as Weston/as Bertha Wardell, Krajnak examines how women of color have been cut from photography’s canon, as well as how the white women who put their bodies in the service of Weston’s work discovered he had cropped their heads, faces, and intellectual contributions to his oeuvre from the history of the medium.

“Master Rituals comes out of my work teaching photographic history and analog photography for more than fifteen years now,” Krajnak says. “I’m interested in the history and materiality of the modern photograph or silver gelatin print, but also the problem of how we, as women of color, inherit this history that is so white and full of fathers. The series is a conversation with these men, questioning the language of modernity and exploring how it echoes into the present. I am trying, in part, to understand what I have internalized about beauty and whiteness.”

Krajnak’s education inducted her into the view that modernity’s major artists were “Minor White, Strand, Steichen, Stieglitz.” But, “now, as a teacher myself, I have to frame assignments with an acknowledgment of the limitations of the canon, which is one reason I grew interested in cropping. What can I, as an artist and educator, crop out of the history of photography and how can I decenter the canon? What is outside the frame?”

In Self-Portrait as Weston/as Charis Wilson, 1925/2020, Krajnak replicates a striking image that Weston took of Wilson’s backside. As in the Wardell photo, Wilson is faceless, breastless, altogether truncated—both in form and in photography’s patrimony. Wilson herself once said during an interview, “It took me a long time to realize that was me that I was looking at when I looked at the picture….Eventually I realized that I did have something to do with it.” Krajnak’s brilliant gesture of concretizing the crop in her own images allows us to see how this tradition actively severs women.

In emphasizing how Weston, Steichen, Stieglitz, and Adams, et. al, redacted women of color from the canon, Krajnak observes that they directed their energies to making portraits of “ideal” white women. Krajnak makes this cutting evident by repatriating herself to the center from “outside the frame.” Moreover, Krajnak strikes a path forward by progressively escaping the negation of the crop. In Self-Portrait as Weston/as Bertha Wardell, 1927/2020, Krajnak reproduces a picture of Wardell’s breasts, stomach, legs, and feet, but now peers at the viewer from atop a stack of concrete blocks. Her burning eyes reveal the intensity of an artist in the grip of the creative process. In Self-Portrait as Weston/as Charis Wilson, 1934/2020, Krajnak reenacts Wilson’s complicated pose in which the model drew up her knees and clasped her shin with her right hand. As usual, Weston’s photo literally defaces Wilson. But Krajnak’s re-imagining puts the “crops” to the side, and we see an artist of color direct her gaze toward us, though just above eye-level, as she focuses on her camera on its tripod. She holds the shutter release above her head and squeezes it. Emerging from the abridgment, Krajnak fills the space with her questions, creativity, and willpower.

Tarrah Krajnak lives in Claremont, CA, and completed her residency at Light Work in August 2021.
www.tarrahkrajnak.com