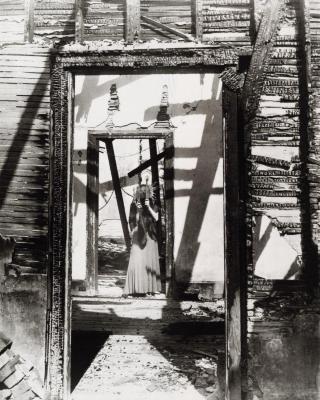 
'This is the rear face of a solid memorial pyramid, containing a tomb, in a Milwaukee cemetery. But the flat surface now becomes non-solid, and non-flat - and we go into a mysterious inner space - which exists visually but not physically (that is, it exists only in this photograph) - and therefore , is not space that the eye could perceive when actually looking at the object. So both the magic of the camera and the mystery of space are involved in the creation of this picture.'

The legendary American surrealist, Clarence John Laughlin, died January 2 after a long illness. Clarence visited us in 1975 in conjunction with his exhibition, and again in 1976. He was an authentic visionary, a true misfit, and for eight decades, a man possessed by curiosity. Possessed! The culmination of his life's work rests in his monumental photo/text volume 'Lost Louisiana'. Completed in 1975, it remains unpublished today. A courageous publisher could provide a fitting memorial to this great American eccentric.