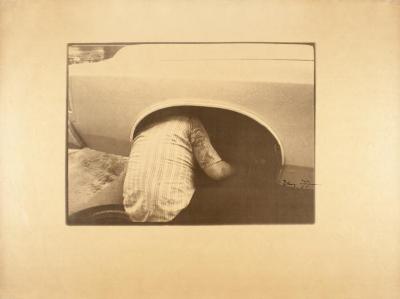 For a more recent CV or bio please visit the artist's website, https://billarnoldphotographs.com/

I stopped to look at where I was.' This simple observation has informed and crystallized Bill Arnold's approach to making pictures for nearly forty years. He believes there is poetry in prosaic everyday occurrences, and that his role as an artist is to find and fix those moments into pictures. In the late 1960's and early 1970's, Arnold, along with Tom Zimmermann, Christian Sunde, Steve Smith, Ingeborg Gerdes, Dennis Hearne, Elaine Mayes, Jerry Burchard, and others, pursued photography as a means of creating personal documents where atmosphere, gesture, and mood were prized over the recording of facts, or the investigation of a particular subject or theme. At that time photography had finally been acknowledged as an important means of artistic expression and Arnold and others were eager to add to the medium's potential by turning casual observations into moments of personal clarity, and by pushing and exploring new tools and techniques.

In 1970 while teaching photography at the San Francisco Art Institute, Arnold became fascinated with a microfilm reading and printing machine that he saw in a local library. The machine was manufactured by the Itek Corporation in Rochester, NY and designed to view microfilm on a large desktop monitor. Unlike other microfilm readers, the Itek machine could also produce instant prints up to twenty-four inches wide, from microfilm, using a photographic stabilization process. Arnold thought the Itek machine could be a great teaching tool, and with the help of Jerry Burchard, his mentor at the Art Institute, he convinced the administrators at the school to purchase one for the photography department.

Since the machine was designed to print from microfilm, Arnold had to make several modifications in order to make prints from 35mm negatives. The modifications were successful and Arnold eventually received a patent for the vacuum easel, he designed for the machine, that enabled it to produce prints similar in quality to ones that could be achieved in a traditional darkroom. Arnold began to use the Itek machine in his classes, allowing students to take pictures, process the film, and produce prints for discussion and critique all within a three-hour class.

Arnold began to use the Itek machine more and more in his personal work. Combined with the Bell & Howell 35mm half-frame camera he favored, which produced seventy-two pictures on a thirty-six exposure roll, Arnold was able to develop a more immediate connection between the act of making a photograph, and evaluating its merits, in one continuous process of creation and critique.

One of Arnold's mentors at the Art Institute was former FSA photographer and legendary teacher John Collier. His advice to Arnold, that one had to, ‘feed the photograph back,' or continue to build on the one moment captured, to realize the next moment's potential, was a lesson that has guided Arnold's work for nearly four decades. The half-frame camera and the Itek printer became the means for Arnold to continually ‘feed the photograph back,' and his desire to ‘cheer for life in all its parts,' became his inspiration for celebrating that discovery.

Arnold also proved to be as innovative in his thinking about the public display of photography as he had been in his discovery of the Itek machine. In 1973 he organized the Boston Bus Show, in which one-thoUnited Statesnd of his Itek prints were displayed on the interior advertising space of forty-four Boston to Cambridge city buses. After he organized a similar show, on four-hundred buses in New York City, that included his work and the work of dozens of other photographers, the idea was quickly disseminated to other cities. To this day CEPA Gallery in Buffalo continues to have a regular program of photography exhibitions on city buses, and many similar kinds of displays can be found across the country on a less regular basis.

Bill Arnold came of age as a photographer at a time when the potential for the medium, as a means of personal expression and creative discovery, was exploding. For a number of individuals that potential meant always having a 35mm rangefinder camera at the ready, and making black and white prints with filed-out negative carriers, that produced defined black frames around each print, to show that nothing was cropped from the precise perspective of the photographer's field of view. Photographers like Arnold helped fuel the enthusiasm for art photography and then stood back, like poets withdrawing, as the medium advanced to embrace new strategies, techniques, and politics to become one of the most elastic and malleable means of expression available to artists today.

Although the three Itek machines, that Bill Arnold still owns are safely packed away in the studio complex he owns and operates in Florence, MA–the paper to make the prints is no longer available–he continues to make pictures with his 35mm full-frame and half-frame cameras. This exhibition includes photographs made from 1967 to 2003, but can only be considered a partial retrospective. Over five-thoUnited Statesnd images were reviewed for inclusion in the exhibition, and his tremendous production and consistency invites further investigation.

In just one example of how Arnold's photographs invite further investigation, consider the image on the cover of this catalogue titled, Embrace, 1976. In subject, structure, and form it bears a close resemblance to Alfred Eisenstaedt's celebrated photograph of a sailor and nurse kissing, in Times Square, on VJ Day in 1945. The clarity of this moment of embrace in Eisenstaedt's photograph is enhanced by the celebration of the circumstances in which it was made, and thus he both defined and preserved a vital historical event. Arnold is from a generation of photographers whose war was Vietnam, which sparked public protests and civil disobedience, with the liberating effect of encouraging the discovery and investigation of personal freedom and expression for many citizens. That such outward social upheaval produced such an inward personal look by so many artists is as ironic as it is telling. Just as Eisenstaedt's photograph defined a national identity for one era, so did Arnold's for another.

Bill Arnold continues to measure his own pulse by the beat of the world around him, and in his attempt to embrace the poetry of everyday life, he has produced a body of work that offers clarity and celebrates introspection, emotion, and mystery.

In the late 80's Itek paper was no longer available. Even though I had the formula by then, the new manufacturer was unable to duplicate paper. I tested every photographic paper at the time, didn't find any that I liked as much as Itek paper, so I began the process of reprinting everything onto 8 x 10. It took quite a while. Once my images were easy to handle, I began to make slide shows, color Xerox reproductions as well as book dummies.' Giselle's World' is a slide show, which was reproduced in Aperture magazine #151. In Groningen, Holland this year I did a 30 years of self-portraits slide show called 'My Space'. For a thank you exhibition, after a residency in Soryo-cho, Hiroshima Prefecture, I sent framed color Xerox reproductions (reproductions, not originals--no customs). At the closing, the prints were given away. And I am working on 3 books now: 'Immediate Sketch' with introduction by Helen Levitt; 'Beautiful Men' with introduction by Robert Bly, and 'Adams Road: The Story of Love Found and Lost'. This one is at the designer's. In the last few years, I've found a paper I like. So my portfolio has been revived. While printing for it, I have noticed a consistent interest over many years in the same subject matter. I am now printing two of these series. What I find interesting, is that the viewer very quickly realizes that all the pictures are connected, but separated by time. These 'projects' occurred after the pictures were made and were guided by my affinity for those subjects.

Update in 2011: During a residency in Japan in 2001, I realized that the angle of the sun, when making a photogram,  determines the depth of the image. Making a photogram with three dimensions is drawing with light. If I really was drawing with light than, I believed, that I should be able to make photogram still lives, portraits and landscapes. Still lives depend on objects, found or made, that when rendered in three dimensions show the vitality of that object. Portraits depend on the manipulation of translucent materials to create personality. Landscapes comes from filtering light that reaches the paper, much like wood block printing.

Bill describes his photogram work in a video made in 2008, which is now available on YouTube:
http://www.youtube.com/watch?v=pzAlEZC_vV0/