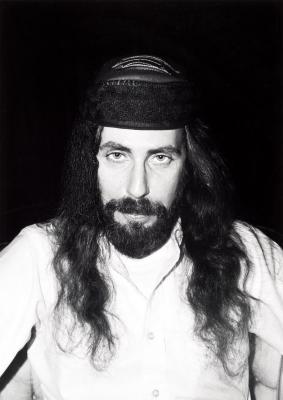 “Having friends like you is what it’s all about…,” wrote Charles Gatewood in 1976, upon reflection of his time in Syracuse as Light Work’s very first Artist-in-Residence. A self taught photographer, Gatewood led a wonderfully accomplished career, publishing seven acclaimed monographs, including A Complete Unknown , a 32-page handmade artist’s book featuring photographs Gatewood made of Bob Dylan in Stockholm, Sweden in 1966.”Taking the Bob Dylan photo gave me faith I could actually be a professional photographer,” said Gatewood. Occasionally doing work for magazines like Rolling Stone, his commercial work allowed him to photograph the likes of Martin Luther King, Jr., Joan Baez, Etta James, Andy Warhol, Annie Sprinkles, and many more.

Gatewood was the recipient of the NY State Arts Council CAPS Fellowships in Photography, the Art Director’s Club Merit Award, and the Leica Medal of Excellence for Outstanding Humanistic Photojournalism.

From a press release precluding his 1976 residency:

“During September, Charles Gatewood, photographer, will be spending the month in residency at Community Darkrooms. A self-taught photographer, Gatewood’s interest in people is evident always in his work. ‘I like people. Human behavior has always fascinated me especially when it is tied to strong emotion. As a photographer, I try to capture these emotions on film to remember, to communicate with others and to comment on what I have experienced.’”

It was Gatewood’s generous donation of several prints that began what is now the Light Work Collection. Now an integral part of the history of the program, his gesture kickstarted a collection of photographs spanning over 40 years of artists that Light Work has had the pleasure of working with.

Forbidden Photographs', a series of fifty portraits by Charles Gatewood, will be exhibited here from March 15 through April 14, 1978. Early works from this series date back to Gatewood's stay in Syracuse as our first artist-in-residence in 1976. Among these is the now notorious 'Human Pincushion, Syracuse, N.Y.' Gatewood's subjects are frequently seen against dead black backgrounds; a visual footnote, perhaps, to the cultural fringes they inhabit, carnivals, Mardi Gras and the world of tattoos. He is currently at work on a new tattoo book with the celebrated tattoo artist, Spider Webb. Gatewood's Previous books include 'Sidetripping' with William S. Burroughs, 'People in Focus' and 'X' with Spider Webb and Marco Vassi.

Charles Gatewood lives in New York City, conducts workshops at the International Center for Photography, and has exhibited widely. 'Fat Tuesday', an exhibition of photographs from Mardi Gras' of the last eight years by Gatewood and George W. Gardner, is currently at the Midtown Y Gallery in New York.