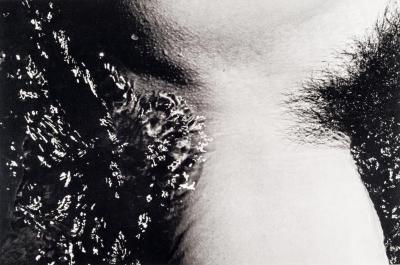 CLEAR LIGHT, The Nudes of Chris Enos by A.D. Coleman

There's a quality permeating this suite of images, which I can only describe as clarity. Though present in a number of ways, it's most immediately visible in the light itself. Surprisingly - given her subject matter and the photographic tradition which surrounds it - Enos' light is not used atmospherically; in fact, it seems not to be 'used' at all, but simply accepted as a given. Straightforward, even blunt, yet without harshness, this light (entirely natural, and in almost every case, exterior) functions sculpturally, modeling the forms under scrutiny without discernible inflection, it is, if anything, impartial.

Though there are male figures in several of the images, they play a strictly secondary and supportive role; these are primarily photographs of women. It is important, I think, to note that the photographer is female, but this does not prescribe the photographs' intentions nor dictate their meanings. Quite the contrary, it suggests, instead, that the issues of feminine and masculine in photographic expression are far more complex than is generally acknowledged. For here we have a woman looking at women, and through her subjects, considering herself. No question but that these are, on some level, acts of self-portraiture; that thread runs visibly throughout Enos' work to date. What aspects of identity are mirrored here? An easy familiarity with the natural world, obviously, and an attunement to the subtle electricities generated when living beings touch. An intense tactile sensitivity to what occurs between the skin and the world outside it. A profound respect for and pleasure in what is unique about women's bodies - particularly to what is powerful (rather than, say, delicate or voluptuous) in their forms. And, above all, an appreciation of light, the full, strong, unflinching 'light of day,' which will outlast us all.

On the evidence of these pictures, Enos would agree with Sydney Smith, who, more than a century ago, proposed that 'the sense of sight is indeed the highest bodily privilege, the purest physical pleasure, which man has derived from his Creator. 'Yet the images suggest, further, that their maker loves not only seeing but being in light. Some photographers are drawn most strongly toward the darkness; what we have here are the visions of a heliotrope.'

The portfolio was designed by Chris Enos and Marjorie Anderson. Each print has been signed and dated by the artist. The edition is forty-five with five artists' proofs. The images are from negatives made between 1971 and 1974 and printed in 1978 while Enos was an Artist-in-Residence at Light Work, Syracuse, NY.