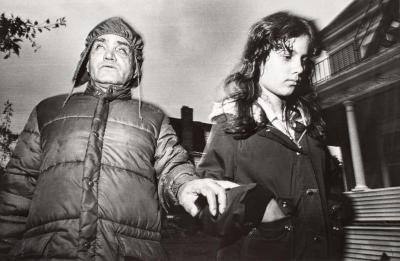 Bruce Gilden and his photography are inextricably linked. Hours as a child looking at tough guys on the bustling streets of Brooklyn from his second-story window shaped Gilden’s attraction to his photographic subjects, which he fondly refers to as “characters”. Bruce began studying sociology, which he soon found too boring and removed from his personality. Bruce quit college and experimented with acting but gave it up when he realized he couldn’t do Shakespeare with his Brooklyn accent.

The climax came in 1968 when, having seen Antonioni’s Blow Up, Gilden felt drawn to photography as a lifestyle and decided that he, too, would become a photographer. He bought himself a cheap Miranda camera and took a few evening classes at the School of Visual Arts, although he is primarily self-taught.

Since then, Bruce has continued to focus on strong characters. Whether in Coney Island, the streets of New York, Haiti, Ireland, Tokyo, India, Russia, England and, more recently, in America, Gilden has applied Robert Capa’s mantra to his own work: “If the picture isn’t good enough, you aren’t close enough”. His confrontational style, and his use of flash, renders his images immediately recognizable, in black-and-white film or now in digital color.

Gilden’s work has been widely exhibited and is part of numerous museum and private collections. He has published 19 monographs including Syracuse, 1981 released in September, 2018 and Only God Can Judge Me, on his ongoing project. Bruce Gilden’s close up portraits in color (published in the book Face, 2015) were exhibited in 2016 in a group show, ‘Strange and Familiar…” at the Barbican Art Museum in London, and in a major group exhibition at Pier 24 in San Francisco, CA. Bruce Gilden joined Magnum Photos in 1998. He received a Guggenheim Fellowship in 2013.

While an artist-in-residence at LW/CD in 1981 Bruce Gilden photographed the streets and the neighborhoods of Syracuse and the State Fair. Working with the intensity of a championship stickball player and the energy of a hyper-active child, Gilden was on the streets every day uncovering the faces, gestures and habits of those who walk them. What he saw, how he saw it and how he translated that into photographs offers a revealing look at one photographer's view of Syracuse, and it's street life. 1981

During a break from signing several copies of his new book Haiti for Light Work’s subscription program, Bruce Gilden stopped for a late lunch at a bar a few blocks from Light Work. Three TV sets over the bar were showing the college football games of the day, and a few people stood at the bar aimlessly observing the contests. A man at the bar less than ten feet from Gilden’s table casually remarked to the bartender about a questionable call made on one of the telecasts. Without missing a beat Gilden announced to no one in particular that this gentleman obviously didn’t know what he was talking about. The man never turned around as Gilden elaborated on the flaws in the man’s observation, but the potential for confrontation was ample evidence of the intensity that flows out of Gilden like water from an unleashed hydrant in the heat of summer.

“Life without risks is a life without rewards” is a mantra that carries Gilden from moment to moment and informs his photographs with abominable curiosity. In his photographs life is not structured, peaceful, or contemplative – it’s raw, quick, and chaotic. It’s a dangerous place for the meek, the indecisive, or the uninformed. Just like the scene in the bar you have to be prepared to respond to every situation, have an answer to every question, and be quick on your feet. If the man in the bar responded to Gilden’s criticism Gilden would have pounced with facts and emotions stored form years of consuming the sports pages of the New York Post. The guy wouldn’t have had a chance, but in the end Gilden’s persuasive charm would probably have won the guy over, or at least had him talking to himself.

Earlier in the day Gilden talked about his motivation as a photographer by mentioning images and characters associated with his father, a scrap metal dealer in Brooklyn, NY. In Gilden’s photographs made on the streets of New York City, men in pork pie hats dressed in shiny suits, chomping on cigars and spewing wisdom were commonplace, recalling the characters he had known from his father’s business. His photographs of New York may never make it into a brochure for the I ♥ New York campaign, but within the tradition of documentary street photography Gilden’s raw and spontaneous images might make you think that Robert Frank and William Klein were working with a view camera.

Gilden’s photographs of Haiti began as an exercise, a new place to go for a change of pace and an opportunity to keep his photographic skills and his eye sharp. Life in Haiti is played out on the streets. The warm weather and pervasive poverty keep everyone and everything out in the open. Gilden’s attraction to this public human drama was overwhelming and he made sixteen trips to Haiti between 1984 and 1996 to produce the photographs in the exhibition and catalogue. Geography wasn’t the only difference between his previous work and the images he made in Haiti. For one, everyone in Gilden’s photographs of Haiti is Black, and he is not. Gilden doesn’t wrestle much with questions of cultural voyeurism, dominance, and privilege that making these photographs might pose, because he felt completely comfortable in Haiti. That level of comfort is evident in his photographs where it extends across the picture plane inviting strangers to wear their emotions on their sleeve. In Haiti with his style of kibitz, grab, and snap photography Gilden became a participant in the public frenzy of human drama where dreams and nightmares are the substance of daily life.

In some of his photographs those dreams are played out like a ballet as he catches passers-by on a busy street frozen in an elegant choreography of graceful observation. Nightmares pour out of other pictures in beads of sweat and drops of blood jarred into view by a hand-held flash synchronized to create a blur of motion that exaggerates and sometimes tempers an unsettling moment. Other pictures fall in-between, linking extremes of human emotions, looking for a balance that’s hard to grasp.

Gilden’s photographs don’t tell the story of Haiti from slavery, to colonization, through independence, and a succession of ruthless dictators. He leaves us on our own to know the circumstances that created the chaos of present day Haiti. In the absence of a story Gilden brings us closer to the kinetic life forces that he deeply feels ever present in the place between our comforts and fears.

In describing this duality of Gilden states: - From my initial sojourn to Haiti I have been drawn to the people’s singular blend of passion and empathy, cruelty and fatalism, resilience and desperation. I’ve strived to capture with a single photograph an image so realistic as to be virtually surreal – a window to the dualism of a country rife with centuries of merciless despotism and unrest yet somehow powerless to unite against tyranny –

With an understanding of that duality Gilden’s photographs bring the human drama of Haiti onto the stage of struggle and survival without compromise.