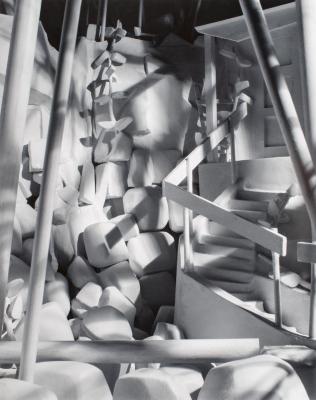 Photography is a confusing medium, or at least one's perception of photographs is easily confused. Since its invention, the accuracy of the descriptive quality of photographs has been manipulated to try to make them look like something else: usually drawings, paintings, or prints. The enormous growth and use of photographs in the 20th century in magazines, newspapers, books, family albums, etc., firmly established that photographs were genuinely believable slices of reality.

James Casebere plays with the viewer's conviction that a photograph is a record of the real. His tabletop set-ups in no way fool the viewer in the way that models made for motion pictures do, but instead, ask that we regard fact and fiction as one; that nothing, especially a photograph, is necessarily what it appears to be.

Casebere's photographs have been shown in solo exhibitions at Sonnabend Gallery, Artist's Space and Franklin Furnace in New York City, and CEPA gallery in Buffalo. His sculpture has been exhibited at the Contemporary Arts Center in Cincinnati. Awarded an NEA artists fellowship in 1982, Casebere also received a New York State Council on the Arts visual artist project grant to do a six month photo light box installation in the waiting room at Battery Park Maritime Terminal for the Staten Island Ferry. Casesbere's work is represented in numerous private collections and the Neuberger Museum in Purchase, NY.