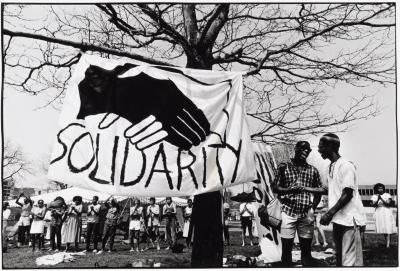 In the fall of 2004 Light Work presented a retrospective exhibition of the work of Michael Davis. This exhibition of forty black-and-white photographs created on Davis's travels across the country and in the state of New York gave the Syracuse community an opportunity to witness the vision and commitment of this artist who has been involved with Light Work since the founding days in the early 1970s.

As a child Michael Davis looked forward to the weekly delivery of Life magazine. Pouring over the pages of black-and-white images he wondered, “How can they take these pictures, they must be invisible?” Fascinated by image making, he talked his parents into buying him an 8mm movie camera. Although he later became caught-up in rock-and-roll music and temporarily replaced his camera with a guitar and organ, the experience of looking at the world through a viewfinder would stay with him. As a professional musician Davis and his band traveled and performed for several years, including a trip to Los Angeles to perform on the “Bud Balou Show.” During this time he spent long hours waiting to perform, which gave him the opportunity to step back and watch people and their behavior, and also to frame each scene as though composing a photograph.

After retiring from the band Davis worked as a public relations director for a local theater in Syracuse, New York. Needing press photos, he began to teach himself photography. With passion and excitement he remembers those years spent building a basic black-and-white darkroom, seeing his first photographs reproduced in the media, looking at any monograph he could get his hands on, especially Henri Cartier-Bresson, Gary Winogrand, William Kline, Robert Frank, and Tony Ray Jones. He recalls looking at “The Americans” every day and attending lectures at Light Work by Bruce Gilden, Sy Rubin, Eugene Smith, and Larry Clark. It was an exciting time to be learning the craft of photography within a community of photographers willing to share information, and Davis was a sponge as he immersed himself in both the aesthetic and technical advances of the day.

In the early 1980s Davis won the Light Work Grant in Photography and began working full time as a photojournalist for the alternative newspaper the Syracuse New Times. He also began to travel across the country looking for an anonymous city in which to explore the solitary art of street photography. As a lifelong resident of Central New York, going out into the streets of Syracuse often “broke the trance” he says, because he ran into too many people he knew. He says he needed, “new places, cities where there is life in the street, where people are involved in themselves.” Davis describes following his camera in a trance-like state into places he probably shouldn’t have gone, like the Bowery at 4:00 am or the back streets of Juarez, Mexico. But it is this ability to totally abandon himself to the process that has produced such a wonderfully quirky mix of images and has allowed him to experience the invisibility he was so drawn to as a child in the pages of Life.

Michael Davis continues to work as a photojournalist, currently switching to a digital camera for his professional work. Once again he’s teaching himself new technical skills and is in the process of purchasing a complex array of equipment. He still loves to get on the road with his two Leica cameras (28 and 15 mm lenses), and a large bag of film. “Just my camera, my TRI-X, and me,” he says with a smile.