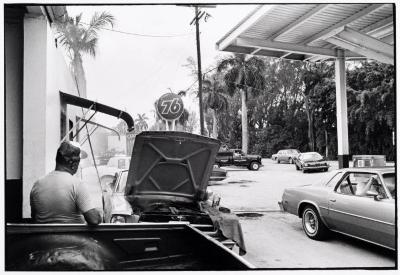 After a degree in Theater at UC Davis, Freund earned an MFA in Photography from the Visual Studies Workshop in Rochester, NY. Currently he is Professor Emeritus of Photography at Ramapo College of New Jersey, where he chaired its Visual Arts program for twenty years. He also taught at Pratt Institute and was a Dayton-Hudson Distinguished Visiting Professor at Carleton College.

His photographs created for a National Endowment for the Arts grant showed gas station environments in 47 states. Other grants include New York’s Creative Arts Public Service program and NYC’s Institute for Art and Urban Resources. In Syracuse for a Light Works fellowship, Freund curated an exhibition of regional photo post cards, and authored a catalog, Penny Publishing.

His work has been exhibited at Light Gallery in New York, MoMA P.S. 1, and the George Eastman House.  His most recent show, in 2017, was at the Lipani Gallery, Fordham University, NYC. Among collections with his work are the Museum of Modern Art, New York, the Corcoran Gallery of Art, Washington, the Museum of Fine Arts, Houston, and the Bibliotheque Nationale.

He has served as photo consultant for the CAPS program, and three times as photography judge for the Fulbright-Hays Scholarships. At the Society for Photographic Education Freund has presented work, participated on panels, chaired committees, and was on its Board of Directors.  In 2011, he presented a paper, Homemade Visual Albums at the Observatory in Brooklyn, NY, followed by an article on that topic, Personal Visual Albums, which appeared in the January 2012 issue of the Ephemera Journal. He is presently on the Board of Directors of the Ephemera Society of America.

Freund's work is a critical, empathetic, sometimes ironic or humorous response to American places and people. He has produced an extension series of photographs of gas stations in the American landscape. Freund chooses mainly the point of view from inside looking out, the same point of view as if he had just stopped by to put air in his tires or buy a Dr. Pepper. For Freund the gas station becomes more than a pit stop, but a starting place to allow us to look at the changing and often humorous American scene, while we watch the rise and fall of the price of a gallon of gas. 1982