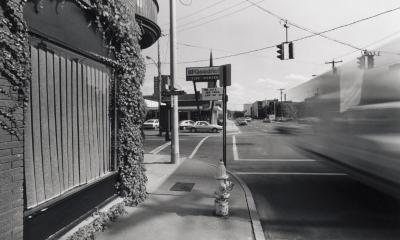 Mark Goodman graduated from Boston University, in 1970, with a degree in Anthropology, and then studied photography with Minor White. A year later, he attended Apeiron Workshops in Photography and began a twenty-year documentary project taking pictures of a generation of children growing up in the nearby village of Millerton, New York. He received fellowships from the National Endowment for the Arts (1973) and the John Simon Guggenheim Memorial Foundation (1977); his photographs were featured in Aperture 19:4 (1975); exhibited in a one-person show at the George Eastman House, in Rochester, New York (1980-1981) ; and A Kind of History: Millerton, New York 1971-1991 was selected by Vince Aletti in the Village Voice as one of the Top Ten Best Photography Books of 2000. Since 2005, he has published limited edition books and portfolios of photographs and personal essays.

For the past ten years Mark Goodman has been photographing the residents of Millerton, a small town in New York state. In these pictures we see young girls pass from puberty into young women and young boys develop muscles and perhaps bad habits. Although his portraits done in Millerton aren't strictly 'before and after' pictures they are about time and change, elements photography and Goodman describe well. Goodman has exhibited his work at the Northlight Gallery and the George Eastman House among others. His work is included in numerous public and private collections and he received an NEA photography fellowship in 1973 and a John Simon Guggenheim Memorial Foundation Fellowship in 1977. He is currently an Assistant Professor in the Department of Art at the University of Texas at Austin. 1983