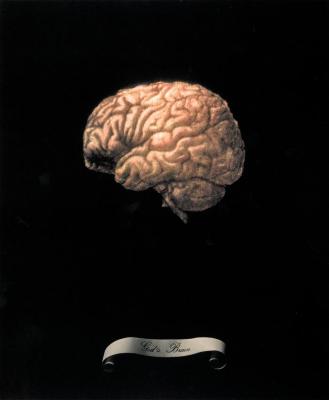 The gentile Southern upbringing and demeanor of Anne Rowland contradict her immodest projections. In the impressive series of work that she has produced, Rowland has projected slides on her body to layer and reflect concepts about the self, flesh and memory. The series are connected by sharp psychological twists where the viewer shares a clash of faith and identity with the artist. For Rowland, the projection of transparencies is a means to both know and hide oneself, mixing popular and personal imagery.

The new work, Dictu Sanctificare, translated from Latin, 'it is said to be sanctified', at first glance creates an intense and direct reaction. The series is an inventory of body parts, belonging to Christian VIP's, presented as pious artifacts. The individual titles play a taxonomic role in shaping the content. God's Brain, for instance, would be a painterly, sparkled mass of pastel convolutions on a dense black ground if not for the elegant script, on the ribbon at the base of the photograph, that classifies this extraordinary brain. Some of Adam's Ribs, scattered horizontally and also charged by heavenly light remind us of our humble beginnings - and inevitable end. Walking on Water is another miracle transfixed by the camera. The tendons and muscles on the soles of the feet become a magician's device to expose a mortal's flesh, the ten mortal toes of one Jeffrey Hoone, as a matter of fact.

Rowland created several new pieces for this series during her residency at Light Work this past October. The large color photographs are a culmination of a lengthy technical process that often begins with library research and proceed to the studio where transparencies are projected, dimension added with translucent fabrics and/or real limbs, rephotographed, the unwanted portions blocked out and finally exposed with the text onto photo paper. For Rowland, the process is sometimes playful, reminiscent of creating theatrical fantasies with a slide projector as a child in Virginia. With a needling wit she tests the association of sex and sainthood with a glowing illustration of God's Penis, as well as the uncircumcised genitalia of His disciples.

The final prints, as in her former series, are the result of thorough planning, impeccable technique and an imagination brimming with irony. In the current context of right wing moral vehemence, Rowland's new work is an elegant antidote to sin, that denudes, unblushing, the exalted stereotypes of patriarchal civilization.

All art is abstract from Michelangelo to Mapplethorpe. Works created by artists are physical manifestations of ideas and passions. Although photographs made by artists clearly demonstrate this idea, the familiarity of the descriptions put forth by photographers has rendered their work as concrete and hastened its inclusion into the canon of responsibility defined by the traditional practices of painting and sculpture.

The quality of familiarity, once the bane to the acceptance of photography’s ability to express original ideas, became its boon as the expressive qualities of the photograph were married with the investigation of culture, popular ideas and politics. William Henry Jackson demonstrated that the ability of photography to record detail could overwhelm and intrigue a generation of pioneering spirits; Walker Evans blended detailed descriptions with observations of the human condition and Robert Franks, Garry Winogrand and Lee Friedlander immortalized the frenetic posture of modern life by poetically describing and skillfully choreographing photographs of its confusion.

With increasing regularity artists are drawn to the unique ability of photography to record the familiar while addressing the abstract qualities of the human spirit. Linda Adele Goodine and Anne Rowland embrace the power of this potential with an intensity that can only be limited by the scope of their imagination. The idea of persona is only a starting point to enter the work of these remarkable artists. Upon investigation, it is apparent that their work blends concepts and techniques into images that evoke the fantastic while presenting highly personal and universally poignant statements.

Linda Adele Goodine creates a personal mythology with ritualistic ceremonies that is ripe with uninhibited expression. The artist is the central figure in many of her tableaux that seek to stress the connection between heart and soul. Her images recall the state of dreams where personal experiences collide with fears and hopes to create a visual diary of one’s central essence and deepest secrets.

Goodine’s intricate set-ups are in natural settings and have been embellished by the artist with local flora and fauna. Working at night to use the darkness as a consistent backdrop, the images appear in baths of painted light. Her techniques add to the fantasy quality of the images and draw the viewer closer to her world that exists between the sentimental and the sinister.

Bursting through the haze of personal fables and private memories is the artist’s use of the female nude. In her work the corporeal to the pervasive in a clear and consistent visual journey.

Ann Rowland also combines meticulous preparation with a highly personal presence in her work. Standing before the camera she projects portraits of historically significant individuals onto her face. As she shrouds part of her face with a cloth to reveal the countenance of the projections, she contorts her unshrouded facial areas and adds hair and makeup as needed to complete the portrait. Once you are accustomed to the uncanny accuracy the artist simulates, you begin to fathom the mysterious connection between the images and the artist’s involvement in their physical makeup and conceptual statements.

We can identify Rowland’s subjects; Frida Khalo, Robert F. Kennedy, Lee Harvey Oswald, Marilyn Monroe, Abraham Lincoln and Coretta Scott King to name a few. We know them insofar as they remind us of a particular point in our lives or identify a particular belief or commitment that we either admire or loathe. By stretching that point of identification to a personal zenith, Rowland firmly attaches herselg, and in turn her viewers, to the fact that our internal hopes, dreams, fears and aspirations do not exist by themselves, but are an integral part of a wide spread life experience.

In her most recent work in the exhibition Rowland moves from famous individuals to historically significant events. The woman crying over her friend shot down by National Guardsmen at Kent State and the pint blank execution of a Viet Cong suspect willfully reinforce how we are personally attacjed to world wide events that we have no control over. We are forever affected by our encounter with these individuals and events so that they have become one with our private experience.

The familiarity of Ann Rowland’s images leads us far into abstract ideas and the intangible nature of Linda Adele Goodine’s work leads us away from commonplace conventions.

Linda Adele Goodine lives in Tallahassee, Florida. All her work in the exhibition was loaned by private collectors and the Res Nova Gallery, New Orleans, Louisiana, Anne Rowland currently resides in Newhall, California.