Laurie Simmons
Waltz of the Flowers, 1983 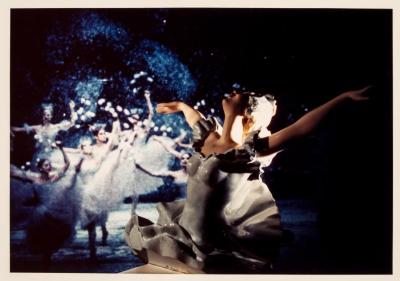 Laurie Simmons was born in 1949 in the Far Rockaway neighborhood of Queens, New York. She began photographing at the age of six, when her father bought her a Brownie camera. She received a BFA from the Tyler School of Art at Temple University in Philadelphia in 1971 and two years later moved to the SoHo neighborhood of New York. Her first photographs were portraits of friends, but she began photographing toys—in particular dolls from the 1950s that she had purchased at an antiquated toy store in the Catskills—after working as a freelance photographer for a dollhouse miniature company. In works such as Jane (1976), Simmons photographed her dolls with dramatic lighting so that they resemble images of people, a practice that allied her with contemporaneous photographers such as Cindy Sherman and Richard Prince. Her work was entirely in black-and-white until 1977, at which point she turned exclusively to color; in 1981, she returned to black-and-white with a haunting series of dolls floating underwater.

In the 1980s, Simmons expanded on her dolls project with series featuring toy ballerinas, cowboys, and “walking objects”—giant props worn by her friend and photographer Jimmy de Sana. Walking Camera I (Jimmy the Camera) (1987) is a tribute to de Sana, who died of AIDS in 1990. Around this time, Simmons also developed Tourism (1983–84), a series of Silver dye bleach prints of postcards of famous tourist sites. Clothes Make the Man (1991) is a series of images of male ventriloquist dummies. In 1994 Simmons commissioned a female dummy with her own face and used it for simulated self-portraits in the Music of Regretseries (1997). In 2000, in collaboration with architect Peter Wheelwright, she created Kaleidoscope House, a dollhouse that she later photographed. The Instant Decorator (2004), based on reproductions in a 1976 decorating book of the same name, features images of modernist architecture collaged helter-skelter with images of women and men sampled from popular magazines and catalogues. For her film The Music of Regret (2006), Simmons recruited Meryl Streep, vintage puppets, and Alvin Ailey dancers dressed as oversize inanimate objects to enact her three-part musical.

Simmons has had solo exhibitions at P.S. 1 in New York (1979), Walker Art Center in Minneapolis (1987), San Jose Museum of Art in San Jose, California (1990), and the Baltimore Museum of Art (1997), among other venues. Her work has also appeared in the Wiener Internationale Biennale (1981), Whitney Biennial (1985 and 1991), Bienal de São Paulo (1985), Austrian Triennial on Photography in Graz (1996), Open Ends: Minimalismand After at the Museum of Modern Art in New York (2000), and Last Picture Show at the Walker Art Center (2003). She received a fellowship from the National Endowment for the Arts in 1984, a Guggenheim Foundation Fellowship in 1997, and a Roy Lichtenstein Residency in Visual Arts from the American Academy in Rome in 2005. She lives and works in New York.

While in Syracuse as an Artist-in-Residence at Light Work, Laurie Simmons continued to explore her interest in photographing figures underwater. While using the classical nude figure, Simmons manages to depict them as weightless forms or vestiges that once inhabited the waters. These photographs are a departure from her earlier work of photographed miniature models constructed in real life situations. Simmons has exhibited and has had her work published extensively, including Metro Pictures in N.Y., and now resides in NYC.