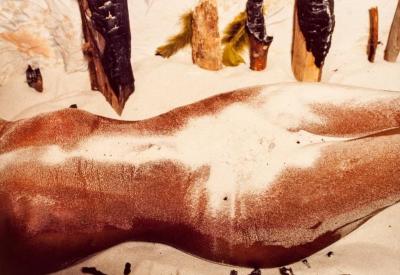 Blalock has exhibited her work at Syracuse University, the Lowe Art Gallery, and Two Flights Up Gallery in Syracuse. She participated in Light Work’s Artist-in-Residence program in July 2002.

Ellen Blalock uses her artistic vision and the mediums of video and photography as expressions of her ideas as they relate to society and the issues that plague African-Americans in an increasingly predominantly, white minority-run country. Blalock, given the gift of a rich and passionate history, allows the voices of her ancestors to resonate through her ideas and creativity. This series explores the human condition through the African-American experience, and strikes a chord in one's soul.

The Father series brings the teen father into focus. We read and hear about the impact of parenting on teenmothers, but what of the fathers? Father. The word, for many, means caretaker, protector, nurturer, parent, and unconditional love. But does the fact that one can spill sperm, or 'shoot a load,' mean they understand the full impact of fatherhood?

The struggles of young African-American men have grown to gargantuan proportions. For years, sociologists have studied the trends of teenagers having children, and the impact it has on their lives. Studies have shown that children born to children have less of a chance to succeed in life, and often repeat the cycle of the birth parent. In turn, social programs have been created to teach these teens how to meet the needs of a newborn baby.

Blalock, through her human-mechanical eye and empathetic soul, focuses on these man-boys with theproduct of their lust, youthful exuberance, recklessness, immaturity, and rite of passage from boys to men. She captures their words, voices, attitudes and expressions, hopes and dreams, and love for their children through video and photographs.

A scenario: A student in college, now working a minimum wage job trying to support his tiny princess, asks his employer for more hours.

Time passes, dreams fade, jobs lost, unskilled, but stilltrying. Will he stay? He hopes, they hope, we hope, but sometimes he can't see that, in this situation, dreams can fade even more quickly and harsher.

'I want to be just like my father. Yeah, my Father is in prison right now, but he's a good father. He's been in prison most of the time I was growing up, but, I love him...Yeah, I want to go to college for a couple of years...I want to be a doctor.'

'Dawg. This is my Dawg,' says one young man looking at his infant son with pride. He never sees a time when they will be apart. This is quite possibly the one person he can depend on to love him unconditionally.

These young men struggle to understand the responsibility of being a parent, and are disparaged by a society that fails to comprehend, or see them as young men; a society that asks, 'What has any young man to offer a baby when they have not yet completed this part of life's journey?'

A teen father may deny a child parentage, not because he wants to, or because of lack of feeling for the child, but because he wonders: 'How can I take care of 'this' when I cannot take care of myself?' This may be attributed to the social morals held by this culture where these young men are viewed as children. Historically, in other societies, mates are taken and households are set up when boys turn thirteen or fourteen. It is considered their rite of passage to becoming men. Procreation is reality.

However, society insists that the teen father cannot, or should not, be a part of the child's life, basing these decisions partially on an economic perspective. It fails to take into consideration that these young men do have the capacity to love and honor the gift of birth, and see this as a life-changing event.

The disparaging of teen fathers only serves to show a lack of respect for these young men and increases their inability to cope with an extremely difficult situation in life. The support that should be shown to them may help change the perceptions they have of themselves and their abilities, helping them to be a positive force in their babies' lives. Blalock's work allows these men to be heard. Her photographs resonate with the many stories and paths taken, and not taken, by teen fathers trying 'to do the right thing.'

Ellen Blalock lived in Georgia before recently moving to Syracuse, NY. She participated in Light Work's Artist-in-Residence program in July 2002.

Mark Wright is a poet and playwright who lives in Syracuse, NY, and works for the Cultural Resources Council.

Blalock has exhibited her work at Syracuse University, the Lowe Art Gallery, and Two Flights Up Gallery in Syracuse.
In organizing the exhibition "Un/Common Threads: Selections from the Light Work Collection," curator Kaylen Williams went beyond a superficial perception of diversity that has become pervasive in the United States. As a 2007 study by the sociology department at University of Minnesota revealed, many Americans happily endorse diversity as a nebulous concept; however, many are still at a loss to discuss the specifics of diversity and its related sub-topics, such as gender, race, ethnicity, economic status, and sexual orientation. (1) "Un/Common Threads" harnessed the power of photographs, using a visual language to voice these all-important specifics of diversity. Williams used the visual language that coalesced among the various images to stimulate dialogue about the complex challenges of a pluralist culture in ways that addressed both broad and personal implications.