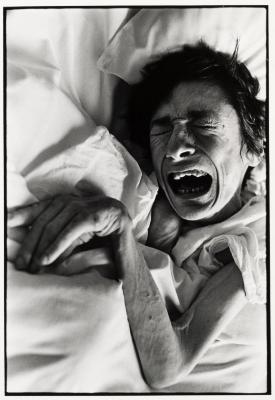 For a more recent CV or bio please visit the artist's website, pattblue.com/home.html

Photography is a wonderfully diverse and deceiving medium. Because of its ability to accurately render details, the truth attached to that information is often understandably believable. We see hundreds of photographs everyday and more often than not we are convinced the information they contain is factual.

Recently many artists have been using the 'believability' of photographs and the use of photographs in our society to challenge the intentions of the images' meanings and to investigate the purpose of their impact. Patt Blue's documentary work has shown us a world of human tragedy - one of contrasts and vulnerability. 'Other People,' 1978-81, chronicles the pain and suffering of the residents of a chronic care institution.

While a resident artist at Light Work, Blue will work on a series called 'Transmutation', which she describes as 'expressionistic photographs about the forbidden, impenetrable, and mysterious nature of men.' In this work, Blue has moved from the arena of real life to the illusionist stage of the studio. Although it's unusual for a documentary photographer to move from reality to illusion, Blue describes this transition as a necessity: 'My beliefs about art and life have not changed but, for this project, I needed more creative freedom without the responsibility of the Documentary.'

Blue presently resides in New York City where she teaches photography at the International Center of Photography and New York University. She is a new member of Archive Pictures and since 1981 has worked as a freelance photographer contributing many award winning essays to 'Life' magazine. She received a CAPS grant in 1981 and a MacDowell Fellowship in both 1983 and 1984. Blue's work is exhibited and published extensively and is represented in collections around the world.