Nina Kuo
The Color of Tradition, 1988 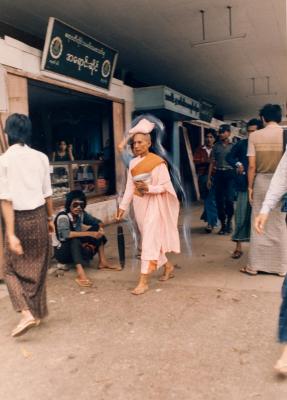 Nina Kuo ‘s photos unveil the true Identity behind the subjects or placement in a seductive manner. Her hand drawn articulation focuses on the mythical artifacts engendered in her art. Her multi-global multi-layered overlay weave a futuristic world of issues that join in a larger conversation.

Nina Kuo, studied Art in Buffalo, NY and received scholarships at ICP. Kuo has curated and lectured on Art, collaborated in Performance venues as well as taught Art Therapy . She exhibited with avant-garde artists . She shown works at The New Museum, Brooklyn Museum, Chicago School of the Arts, EnFoco, etc. Notably, Kuo has exhibited Photos with curators Lucy Lippard , Kellie Jones, Thelma Golden, Fred Wilson, Howardena Pindell and Marcia Tucker. Her photos appear in Lucy Lippard’s two books as well. Kuo works in mixed media, photography and video. Kuo developed a new body of montages and sculptural works with clay. Working in video has encouraged her to research the ongoing evolution of multi-cultures and has given her access to translated icons hidden in her own works, taking her art to a new emotional level. She Worked with Outsider Artists and believes Art serves our Community even with her Asian equality art on Pvt. Danny Chen at White Box.

When new ideas and customs smother and ridicule tradition, our sense of culture becomes confused. Ignorance and indifference flourish and after time society becomes imbued with generic passions, stripped of any cultural heritage, punctuated only by greater or lesser degrees of indifference.

Nina Kuo understands the importance of observing and respecting tradition. In her photographs she emphasizes the beauty and enigma of the forms and gestures of Asian cultures while exploring contemporary values and virtues with techniques that range from understated subtlety to extravagant amplification. Sleeping infants pictured from above and rendered in muted hand-colored hues honor the preservation of innocence, and evoke the stillness of silent meditation. In other images exotic and commonplace individuals are outlined by rings off metallic paint simulating auras or halos that emphasize their grace and reverential stature. This simple devise repeated in selected images grants the individuals a freedom within the picture frame. Kuo recognizes their importance by accenting their presence and recognizes their mortality by depicting them within the clutter and confusion of daily routines.
Kuo's hand-colored alterations stress her involvement with her subjects, transforming static moments into quiet reflections on the importance of observing traditional cultures as we explore our place in modern day life.