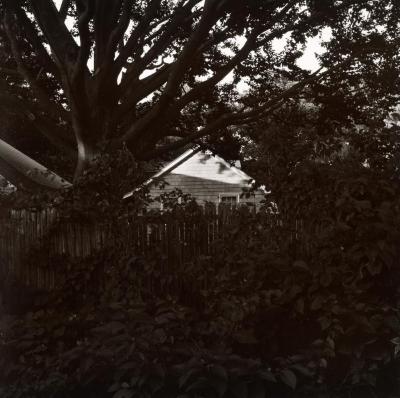 Photographer Robert Giard died unexpectedly on July 16, 2002 shortly before his 63rd birthday. He participated in our Artist-in-Residence program in 1985, and we continued an active correspondence over the next dozen years.

(Circa 2003)
In 1990, we exhibited fifty-two prints from his series Particular Voices, Portraits of Gay and Lesbian Writers, and in 1994 we awarded Giard one of the first grants from our Endowment Fund for Mid-Career Artists to continue his work on the Particular Voices series. The project eventually grew to include 500portraits of significant gay and lesbian literary figures, as well as young, up-and-coming writers. A selection of these portraits was published by MIT Press in 1997.

Giard lived for over thirty years in Amagansett, Long Island with his life partner, Jonathan Silin. In addition to portraits, Giard also produced a large body of landscape photographs of eastern Long Island.

The following text appeared in the brochure that accompanied Giard's exhibition in Light Work's Robert B. Menschel Photography Gallery in 1990, and resonates even more clearly now than it did then.


Mortality is an intrinsic attribute of every photographic portrait. The instant light activates the silver halide emulsion of film, a moment described dissolves into a moment remembered. The challenge for the portrait photographer is to enchant the temporal instants of time in front of the camera. When this is achieved the sitter acknowledges the photographer with emotional authenticity and silent conversations.

Robert Giard achieves this bond over and over again with the subjects in his ongoing series Particular Voices, Portraits of Gay and Lesbian Writers. Giard is gay and has a background in literature. These personal alliances strengthen the bond of trust and understanding between himself and his subjects and informs the series with a specific and familiar necessity.

In the portrait of James Purdy reproduced in this brochure, we see the author tentatively reach out to the mantelpiece for support in a room where he is surrounded by comforting mementos and icons of his personal history. Through this ongoing project Giard offers us all comfort and support as he invites us to recognize the expression of integrity in individuals empowered by strength and courage.

The Robert J. Giard, Jr. Memorial Fund has been formed to preserve Robert Giard's photographic legacy and to bring it to a larger public. Most immediately, the fund intends to archive and catalogue all negatives and existing prints, and to house them under appropriate conditions. Donations to the fund can be sent to: Robert J. Giard, Jr., Memorial Fund, c/o Barry Klingman, Waeshaw Burstein Cohen Schlesinger and Kruh, LLP, 555 Fifth Avenue, New York, NY 10017-2456.