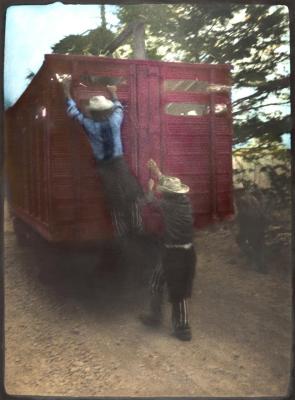 For Danny Caracelo, the craft of photography plays an important roll in his work. Over the past ten years he has worked as a professional printer, honing his skills for the most demanding clients. A good deal of that time was spent in San Francisco making custom black-and-white prints for a variety of commercial photographers and artists including John Gutmann, and for the past two years he has been working as a color printer in Boston where he is considered one of the finest in the area.

In his personal work Caracelo makes hand colored black and white pictures that allow him to take full advantage of his black and white printing skills and offers him the opportunity to make singular decisions about the application of color that eludes conventional color printing materials. Using these combinations he is able to exploit the lyrical quality of course grain black and white film while selectively choreographing the density of color in different combinations to produce striking color pictures that never existed before the lens.