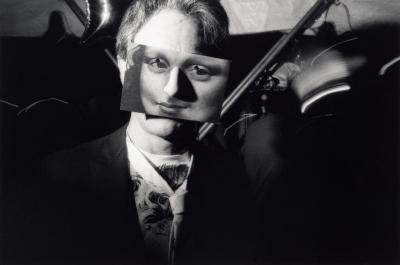 Later this year we will host the 100th artist in our residency program. Currently we invite 12-15 artists per year to participate in the program. Each artist is provided with an apartment, darkroom, studio and $1000 stipend. During their visit the artists' are free to work on the project of their choice without any teaching or workshop responsibilities. The opportunity to have a free month to pursue ones work unbound of restrictions and distractions in the supportive and encouraging environment we try to provide, has been a productive experience to the vast majority of artists who have participated in the program. Residencies are available year round and open to application on a continuing basis.

The main goal of the program is to encourage the production of new work. Some artists catch up on printing (last year we installed a 20' Hope color processor) while others make new photographs. When Kerry Coppin was a visiting artist in September 1986 he spent the entire month wading through 1100 rolls of film shot during an eleven-month period in Hawaii where he was a visiting instructor. We exhibited work from that marathon printing and editing session in the Light Work Gallery from November 9 - December 10, 1987. Many photographers speak (complain might be a better word) about the backlog of negatives they either have yet to process, proof or print. This situation is relatively unique to photographers within the art world. Painters rarely have a huge backlog of paintings. In many cases it might be years before a photographer gets around to printing a negative made in 1/250th of a second. A lot happens in two years and the ideas and attitudes of the artist could have wandered from the day he exposed the actual negative. Those changes in the artist would also effect what negatives, if any, he decided to print or how he would print them, not to mention what he would do with them.

When Garry Winogrand died in 1982 he left behind thoUnited Statesnds of unproofed and thoUnited Statesnds of undeveloped rolls of film. With the permission of the trustee(s) of Winogrand's estate and under the supervision of the Museum of Modern Art in New York, that film has been developed and proofed. Some of that work will be made into exhibition prints and included in an upcoming exhibition of the artists work at the Museum. This is a very disturbing practice that shows a lack of understanding of the creative process and misguided sense of respect for the artist. It is the artist's right to choose and edit. That choice is the artists alone and cannot be compromised despite the best of intentions.

Kerry Coppin may never thoroughly edit the 1100 rolls of film he made during his time in Hawaii, but the 35 images he exhibited at Light Work last fall reflect his concerns of human intrusion into one of the most beautiful landscapes in the world. In these images Coppin reveals that all is not well in paradise and that our 50th State has paid a very high price for all the white shoes and belts roaming the lobbies of beachfront hotels. An equally disturbing matter apparent in his work is the displacement of the indigenous people and subjugation of their cultural heritage. Coppin likes to talk about his work and his description adds meaning and context to the images. Because he finds himself verbally describing the background incidents and feelings about his photographs he is considering accompanying the work with text.