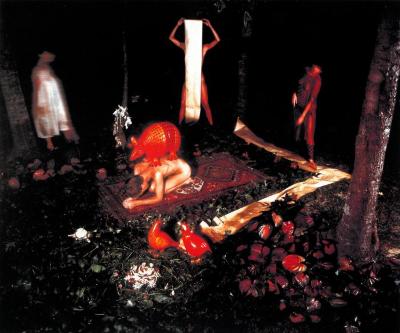 Sacrifice, retribution and growth are simultaneously revealed in the epic scale Cibachrome prints by Linda Adele Goodine. Goodine creates rituals of transformation, rich in symbols and layers of emotions, to recreate the fertility of dreams through which loss, revenge, and emergence are violently enacted. In her backyard Florida studio Goodine carefully prepares her sets, arranging indigenous blooming flora against bare and sometimes hand painted branches, and unfolding fabric amidst rigidly symbolic props and toys.

Goodine uses her family, friends and herself, naked and draped, to perform the psychic drama. The performance takes place at night and is photographed with direct flash or strobe and long exposure times. The sharp illumination and bitter intensity of colors project an otherwise complex narrative as sudden recognition; the viewer is seduced and receptive. Once involved, details overwhelm us and blurs of motion out of the darkness confound what we thought we understood. Goodine's photographs are in essence psychic self portraits of artist as Puck, who like in 'Midsummer Night's Dream' leads us into the dark forest and leaves us to our own devices.

Linda Adele Goodine was an Artist-in-Residence at LW/CD in 1986. She lives in Tallahassee, Florida.

All art is abstract from Michelangelo to Mapplethorpe. Works created by artists are physical manifestations of ideas and passions. Although photographs made by artists clearly demonstrated this idea, the familiarity of the descriptions put forth by photographers has rendered their work as concrete and hastened its inclusion into the canon of respectability defined by the traditional practices of painting and sculpture.

The quality of familiarity, once the vein to the acceptance of photography's ability to express original ideas, became its boon as the expressive qualities of the photograph were married with the investigation of culture, popular ideas and politics. William Henry Jackson demonstrated that the ability of photography to record detail could overwhelm and intrigue a generation of pioneering spirits; Walker Evans blended detailed descriptions with observations of the human condition and Robert Frank, Garry Winogrand and Lee Freelander immortalized the  frenetic posture of modern life by  poetically describing and skillfully choreographing photographs of its confusion.

With increasing regularity artists are drawn to the unique ability of Photography to record the familiar while addressing the abstract qualities of the human spirit. Linda Adele Goodine and Anne Rowland embrace the power of this potential with an intensity that can only be limited by the scope of their imagination. The idea of persona is only a starting point to enter the work of  these remarkable artists. Upon investigation, it is apparent that their work blend concepts and techniques into images that evoke the fantastic while presenting highly personal and universally poignant statements.

Linda Adele Goodine creates a personal mythology with ritualistic ceremonies that is ripe with uninhibited expression. The artist is the central figure in many of her tableaux that seek to stress the connection between heart and soul. Her images recall the state of dreams where personal experiences collide with fears and hopes to create a visual diary of one's central essence and deepest secrets.

Goodine’s intricate set-ups are in natural settings and have been embellished by the artist with local flora and fauna. Working at night to use the darkness as a consistent backdrop, the images appear in baths of painted light. Her techniques add to the fantasy quality of the images and draw the viewer closer to her world that exists between the sentimental and the sinister.

Bursting through the haze of personal fables and private memories is the artist’s use of the female nude. In her work the female resists the gaze of masculine fantasy and emerges as artist and creator Goodine’s images take the viewer full circle from the corporal to the pervasive in a clear and consistent visual journey.

Anne Rowland also combines meticulous preparation with a highly personal presence in her work. Standing before the camera she projects portraits of historically significant individuals on to her face. As she shrouds part of her face with a cloth to reveal the countenance of the projections, she contorts her unshrouded facial areas and adds hair and makeup as needed to complete the portrait. Once you are accustomed to the uncanny accuracy the artist simulates, you begin to fathom the mysterious connection between the images and the artist involvement in their physical makeup and conceptual statements.

We can identify Frida Kahlo, Robert F Kennedy, Lee Harvey Oswald, Marilyn Monroe, Abraham Lincoln and Coretta Scott King to name a few. We know them insofar is they remind us of a particular point in our lives or identify a particular belief or commitment that we either admire or loath. By stretching that point of identification to a persona zenith, Roland firmly attaches herself, and in turn her viewers, to the fact that our internal hopes, dreams, fears and aspirations do not exist by themselves, but are an integral part of a widespread life experience.

In her most recent work in the exhibition Rowland moves from famous individuals to historically significant events. The woman crying over her friend shot down by national Guardsmen at Kent State and the point-blank execution of a Vietcong suspect willfully reinforce how we are personally attached to World Wide events that we have no control over. We are forever affected by our encounter with these individuals and events so that they have become one with our private experience.

The familiarity of Anne Rowland's images leads us far into abstract ideas in the intangible nature of Linda Adele Goodine's work leads us away from commonplace conventions.

Linda Adele Goodine lives in Tallahassee Florida. All her work in the exhibition was loaned by private collectors in the Res Nova gallery, New Orleans, Louisiana. And Rowland currently resides in Newhall, California.