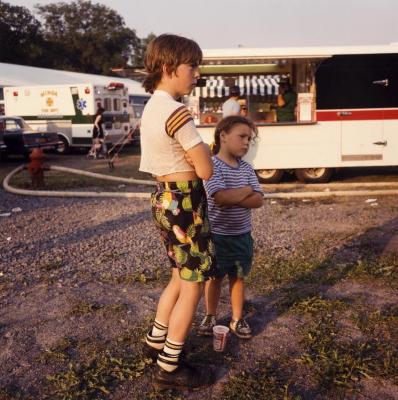 Richard Colburn’s work has been shown in many solo and group exhibitions. He holds an MFA from the University of Minnesota and taught in the Department of Art at the University of Northern Iowa. He now lives in Duluth, Minnesota, an hour from the Iron Range.

When people are on display whether at parades, fairs, civic events or just walking down the street, they seem to take on the aura of those events or tasks. At fairs people become, at the same time, gawkers and gawkees; civic events bring out the patriot and the adversary; and just walking down the street can produce postures from paranoid to showoff.

Nobody loves a parade, a civic event, or just a simple gathering of folks around a common cause more than Richard Colburn. These events of public display and civic pride have been the subject of his photographs for the past few years. There is a festive ease about these spectacles that Colburn uses to his advantage to penetrate the otherwise rigid facade of individuals and make photographs that are as casual and familiar as a conversation between old friends. He finds a certain amount of idiosyncrasies in the public side of individuals expressed in images of out of the shape flag toting vets that have given up the physique but not the spirit, to views of cigarette smoking teenage mothers watching parades commemorating, who knows what, while placating the babies at their feet with junk food and ice cream.

Whenever there is a gathering of individuals around a certain event or remembrance there will always be an outpouring of emotion, gestures and meaning that give that event an eternal significance whether it be personal or public. Colburn's appreciation and understanding of that pathos imbues his work with a spirit of fascination and an eye for the ironic that is always present but rarely so skillfully rendered.

Richard Colburn lives in Cedar Falls, Iowa. He participated in our Artist-in-Residence program this past summer.