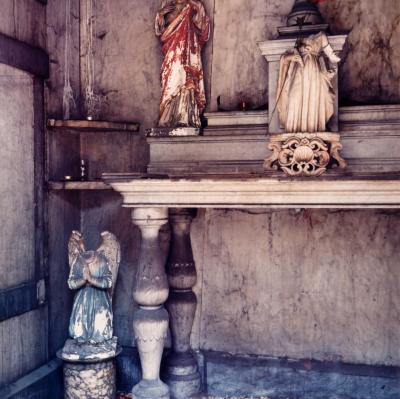 In this age when photographs are a common and prolific medium of exchange , Confucius might edit his famous philosophy to say, 'One picture is worth ten thoUnited Statesnd pictures.' The weight of the world could be considerably relieved if the poet and the artist would share the ancient caution to work toward the same precise end.

The delicately hued and incredibly detailed color photographs of the Pere-Lachaise cemetery in Paris by Lou Marcus, speak silent volumes about the spirit of life and disordered impact of death. His patiently timed exposures in dim mausoleums and heavily shaded graveyards, bring details to equally sharp focus and mute the colors to match the softness of the eroded stonework. Amidst the layers of ornamentation, in the full bloom of decay, is a gentle parody. The tombs have been vandalized, one imagines by young punk types in the throes of immortal arrogance. Here an abundance of mementos, from family photographs to penknives and angels cast in stone, are scattered and slowly being digested by cobwebs and dampness. The constant activity of time mocks even the permanence of death.

Marcus arrived at Light Work for his August residency fresh from France, where he spent 2 months teaching American students. He spent his time in Syracuse buried in the darkroom printing recent work. The current work is an extension of his previous indoor documentation in natural history museums, images where a fragile illusion of beauty collides with cosmetic reverence. The new Paris landscapes, that Marcus declares are in 'the formative stage', are even more subtle descriptions of a 'nature / culture dichotomy'. The poetic homages to landscape are in fact discoveries of artificial environments that have been reclaimed by the forces of nature. The plaster cliff in a Parisian park, that crumbles at the base to expose a human framework, contemplates the bigger picture of anonymity and faith in what we make and what we see.