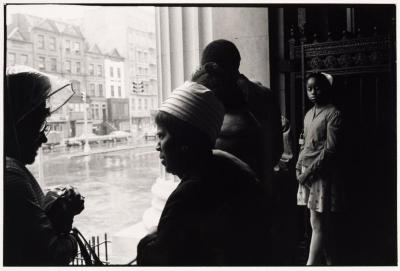 Marilyn Nance confesses that she doesn't remember when she stopped going to church, but she does remember the first Black Power Rally she attended in 1968 while still in junior high school. The natural alignment of politics and spirituality in African American society is the genesis for Nance's photographs in, Religion, African American Spiritual Expressions, a work-in-progress. Her striking photograph of the oversize placards of the Reverend Martin Luther King, Jr., the Honorable Elijah Muhammad and Malcolm X at an anti-apartheid rally in Central Park emphasizes the influence of religious leaders in the liberation of Black people. The solemn faces of monumental figures share the conviction of Nelson Mandela's recent statement that, 'The march towards freedom is irreversible.'

Nance has made it a personal mission to photograph spiritual expression in the African American community. The forced passage of Africans to this 'New World' was a baptism of fire, that tested the endurance of divinities and customs from a culture many thoUnited Statesnds of years old. In her work Nance discovers the survival and reclamation of African culture, from her photographs of the storefront churches that line Fulton Street in Brooklyn, New York to a women's initiation ceremony in a church backyard in Queens, NY. Like the lyrics of a sermon or gospel song, the work is rich in metaphor, using references to the divine to describe an earthly condition.

Nance's methodology for this project has developed out of her background as a photojournalist, a recognition that she was directly involved in contemporary African American historymaking, and a spiritual attitude. All the images in the exhibition were photographed in the US. The photograph, Great Aunts/Grandma Anna's Funeral, Birmingham, Alabama, 1979, is an example of how Nance beautifully balances solidity of form with the integrity of human experience. The photographs from the family gathering in Alabama are a personal narrative which pays homage to human connections.

Reverence for ancestors encompasses African religions, a resemblance to Native American spirituality, and is a cord to communicate cultural traditions to the next generation. Respect for the voices of one's ancestors is also an act of reverence for the cycles of nature. Nance has photographed Oyotunji Village, a self sufficient community of 50 women, men and children set in Beaufort County, South Carolina. Founded in 1969 and modeled after the culture of Yoruba people from Southwest Nigeria, a sign welcomes visitors with the notice that, ' You are leaving the U.S. You are entering Yoruba Kingdom.' In the photograph, Priests of the Yemoja Cult, two figures retreat backwards from the King's courtyard. The details inside the walls, such as the fabric the priests (a man and a woman) are wrapped in and the teardrop shaped fans they carry as well as the abstract patterns of triangles on the plywood walls identify order within nature while the parked car outside puts these ancient practices into the context of the 20th century. The uplifted foot in the lower left hand corner recalls the delicate balance required to live with one foot in two worlds.

Since 1989 Nance has been photographing and audiotaping Sunday services at the Progressive Baptist Church in the Bedford Stuyvesant neighborhood of Brooklyn. This community of religious people, transplanted from the South to a concrete urban setting, bear an interesting communal likeness to Oyotunji Village. The photographs represented in this catalogue capture a congregation sharing time-honored Sunday rituals of renewal. The ordered interior is vibrant with details, stained glass windows animated by light, intricately textured walls, the counterpoint of flag and crucifix, and correspondence of the women's shapely outfits, hairdo's and flowered hats. When Zora Neale Hurston, African American folklorist and Harlem Renaissance artist, describes the characteristics of 'Negro drama' in her book, The Sanctified Church, it is as if she were testifying about the Progressive Baptist Church. She says,' Everything is acted out. Unconsciously for the most part, of course. There is an impromptu ceremony always ready for every hour of life. No little moment goes unadorned.'

In her exploration of religious expressions in the African American community Nance has set the stage for further study. The visual impact of her photographs carries the tempo of an actively spiritual culture.