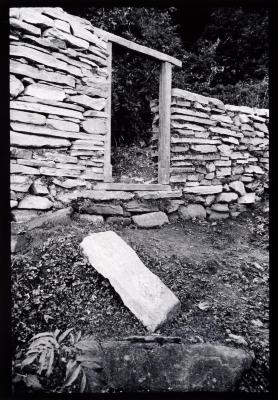 Photographs of far away and exotic places have always had the ability to capture and hold one's imagination. The popularity of nineteenth century photographs of the American West by William Henry Jackson and the reverence for the slick color pictures in the most recent issue of National Geographic magazine reinforce the fact that, the exotic or the unknown is automatically intriguing. The impact of these kinds of pictures is usually more dependent on the exotic nature of their subject matter than the photographer's interpretation of that information. This situation is exaggerated further because most of the photographers making these pictures are from some place else, and all they can see is what's new to them.

Blanca Sierra was born in Colombia, South America, has lived in the United States for 12 years and spent a few years working as a travel guide in Japan. In the early 1980's she made an extended trip to Nepal to photograph the country and it's people. While a visiting artist at Light Work she edited and printed work from that trip.

To understand the significant codes of one culture, it is important to intimately know or to have experienced the codes of a similar culture. Colombia, South America and Nepal, India are about as far apart on the planet as you can get, but they share a certain amount of third world character, as New York and Paris share traffic congestion problems. It is within this context of cultural understanding and exchange that Sierra approached Nepal as a photographer, and the resulting images she made exhibit that sensitivity and understanding.

Focusing on the small details of custom and the stark overview of ritual, Sierra was able to describe the cultural integrity and intuition of the people, and still allude to the startling beauty of the country. This quality in her work comes from Sierra's ability to recognize and appreciate the cultural signifiers of the people, and to quickly respond to those situations with her camera when they present themselves to her, in a skilled and informed manner.