David H. Wells
At an Orthodox Jewish Yeshiva, in Philadelphia, A Student Dozes After a Study Session and Before Sabbath Prayers, 1987 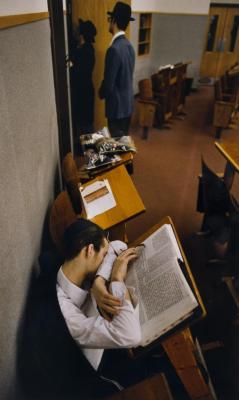 David Helfer Wells is photographer/video maker using whatever technology he can to create award winning visual narratives. He was born in Albany, New York, raised in Downey, California and now is based in Providence, Rhode Island. Affiliated with Aurora Photos, he is also a photo-educator. One editor described him as a “…specialist in intercultural communication and visual narratives that excel in their creative mastery of light, shadow and sound, stills and video.” Wells became the photographer he is today by trying on the styles and/or methods of other well-known and historic photographers, initially at Pitzer College in Claremont, California. Then he mastered the challenging discipline of color slide film. He fused all of these experiences over thirty-plus years working as a newspaper photojournalist then as a magazine photojournalist to develop his own style, built on a mastery of light, exposure and tonality, framing and composition with predictable and consistent control over focus and depth of field. As a photography educator, he leads students to learn how to consistently master these same elements of photography. The Philadelphia Inquirer nominated his project on the pesticide poisoning of California farm workers for a Pulitzer Prize. He has worked on assignment for such magazines as Fortune, Life, National Geographic, Newsweek, The Sunday New York Times, Time, etc. He also worked for non-profits such as the Ford Foundation and the New Israel Fund. His work has been in over fifty exhibitions and he has taught workshops at the International Center for Photography in NYC and at the Maine Media Workshops. He has received two Fulbright fellowships, a grant from Nikon/N.P.P.A., a fellowship from the Pennsylvania Council on the Arts and fellowship from the MacArthur Foundation’s Program of Research and Writing on International Peace and Cooperation.

Traditional photojournalism usually involves black and white images for newspaper reproduction. But, as daily publications introduce color, contemporary photojournalists explore a new aspect of photography. David Wells is one those photographers, documenting American life for a mass audience in living color. Against the surge of swift images provided by television, Wells allows viewers the time to think about what they are seeing, by holding the moment and revealing its subtleties. This time to think and absorb information is critical to Well's work, for his subject matter revolves around thought provoking issues. One on-going project addresses American homeless, from the man in San Francisco with a shopping cart that holds all his worldly possessions including his pet rabbit, to the radical group of teenage squatters who occupy abandoned buildings in Philadelphia. By focusing on the issue from a variety on angles, Wells provides an in-depth documentary of a growing social problem.

During his month-long residency in October 1987, Wells concentrated on improving his skills as a color printer. His recent photo-essay, on the exclusive Talmudical Yeshiva of Philadelphia, an internationally renowned school for Jewish boys and young adults, covered six pages and the center spread of the Philadelphia Inquirer Magazine. During his Light Work residency, Wells began printing his own color images. After reprinting his Yeshiva series he realized that decisions made in the darkroom were just as important as those made during the taking of the photograph. Through continued practice Wells discovered that he could control subtle color differences in the print that allowed him to portray the original feeling of his work more accurately.

As color photographs continue to play a more important part of the printed media's output, decisions made by photojournalists in every production aspect of the final image will become a more thoughtful part of that process. In this regard David Wells has advanced his documentary concerns by consciously combining his skill for revealing the honesty of any given situation with his understanding of the craft of color photography. This combination will no doubt heighten his proven ability to reveal the truths of human interaction against the details of institutional constraints, that currently resounds in his work.