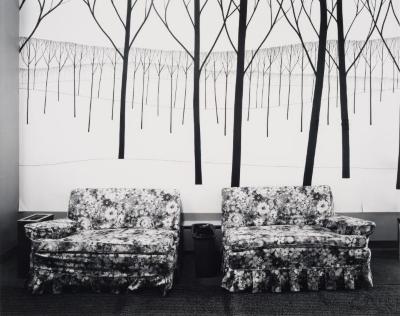 For a more recent CV or bio please visit the artist's website, https://www.lynne-cohen.com/

Lynne Cohen has been photographing interiors for fifteen years. The formal and graphic rendering of the rooms that Cohen searches out, share the same post-war, pre-fab, minimal and modular influence that Lewis Baltz discovered outside the slab concrete industrial plants he photographed in Southern California. Cohen's space is similarly flattened and unpopulated underscoring the emptiness and amplifying currents of anxiety as if it could be regulated by climate control. She always maintains a public distance in the spaces she visits, from living room to office reception area. What she sees and selects are on the surface funny observations about human idiosyncrasies and the lifeless atmospheres we create. The deadly reality is that there are devices in modern offices that can suck the oxygen out of a room, risking human life, to protect computer equipment from fire damage.

Cohen's chambers are sparsely furnished, every lamp, plant and painting serving a purpose. Each space is a brilliant representation of our material world as the product and the package wrapped up in one. The photographs are full of information about our daily existence and, most poignantly, they are time capsules of what we want to pack with us into the Space Age.

The collection of work in her new book, Occupied Territory, published by Aperture, shows a developing inclination towards rooms that are in themselves set up for observation. Behavior laboratories and classrooms are surveyed with the same detached but ironic look. Though she shoots 'straight', Cohen makes theater from the clinical, sharpening the edge of reality to the point of convincing one Village Voice reviewer to mistake the work as being manufactured 'like Cindy Sherman'. David Byrne, himself a homespun modernist, makes the observation in his introduction to the book, that there is interesting art in ordinary places. Cohen, we hope, will be following these vernacular forms into the post modern future.

During a residency at Light Work this past summer Lynne Cohen made 8 x 10 exposures in locations around Syracuse University. She lives and teaches in Ottawa, Canada.