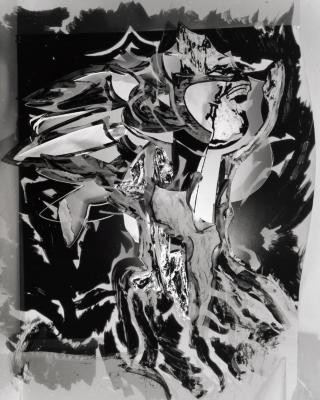 For a more recent CV or bio please visit the artist's website, winfredevers.nl

Working with photography since 1975.
Based in Amsterdam NL.
Theme ; ‘Being To Know, Knowing To Be’.
Last exhibit :  ‘L’Empreintes' / Musée De La Palmerai,  Marrakech Biennial 2016.
A black and white-monography will show up in 2019 ; 'Volume I’

Between Daguerre and Snapchat the applications and distribution of photography have multiplied with the speed of light.
However, the essence of an image stays the same ; can it deepen the experience of the beholder ? Will it expand in several directions concerning meaning and emotion.
The intention of the photographer might reinforce the final experience of the viewer in many ways.
In my constructed photo-works, I reconstruct to intensify a pictorial experience.
The medium of photography can be seen as an immense screen to reflect on our existence, being a translucent membrane of awareness, between the undeniable split second in the here and now, and more poetical dimensions, if they are not happening simultaneously.
Departing from the fact that as a photographer you always walk the road in parallel worlds ; the outward reality in front of you and the dormant icon in your psyche, a slumbering framework with a gnawing void to fulfill with emotionally valuable content.
Working mostly with installations and still-life, I can take the photographic components as time, substance and shape apart, to recreate a reality which encloses the aforementioned need to construct a most personal image, which might have some universal connections.
The need to sculpt a composition beyond flashy daily life, creating a parallel world, perhaps stems from an inner longing for utopic harmony.
Somehow I want to offer the viewer a moment of contemplation ; to invite the beholder to a shift of their mental-set, only for a brief moment, to come back to daily reality with a slightly different perception.
The digital possibilities bring the mixed media nowadays to a higher octave, since now sculptural and graphical elements can be fluently combined, while still reflecting a photographic reality ; the real feel of the photographic experience.
Photography ; the medium par excellence to construct an image between the obvious and the etherial.

In the Netherlands where the surrealist spirit never more than flickered, many contemporary Dutch artists use the precise descriptive capabilities of photography to investigate the fertile landscape of the imagination. Amsterdam's Winifred Evers has been making staged photographs for a number of years and is among the growing number of European artists using photography to pursue combinations of fantasy, illusion, and form. Evers continued to expand his contribution to this genre during his residency at Light Work in September, 1988.

At first glance his photographs appear completely abstract lacking perspective, horizon, point of view, or familiar objects and places; traits usually associated with photographic representation. Upon closer inspection not only are most of these familiar nomenclatures present, they are the subject of his work. He records, in fine detail, the structure of chairs, the texture of crumpled foil, the framework of folded paper, and the simple forms of familiar household objects.

Evers images are created in the camera using precise measurements and intricate masking techniques. This aspect of his work reinforced the precision of the photographic process and creates a tension between space, volume, plane and perspective heightening the relationship between the image and the reality it portrays. Evers engages the audience with the eloquent complexity of his images by portraying ordinary objects in extraordinary arrangements. He allows photography's strength of precise description to serve his sense of fantasy and abstraction, opening the doors of imagination while resting at the portals of substance.