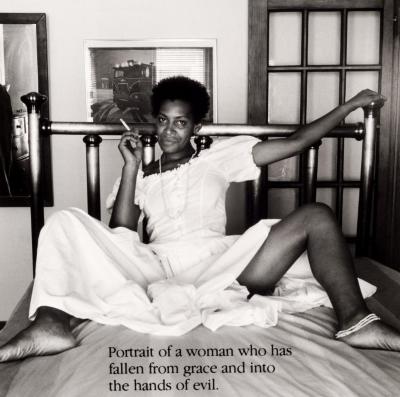 Carrie Mae Weems is considered one of the most influential contemporary American artists. In a career spanning over 30 years, she has investigated family relationships, cultural identity, sexism, class, political systems and the consequences of power. Weems’ complex body of art employs photographs, text, fabric, audio, digital images, installation and video. Weems has received numerous awards, grants and fellowships, including the prestigious MacArthur “Genius” grant and the Prix de Roma. She is represented in public and private collections around the world, including The Metropolitan Museum of Art, The Museum of Fine Arts, Houston, The Museum of Modern Art and the Museum of Contemporary Art, Los Angeles. Weems participated in Light Work’s Artist-in-Residence program in 1988.

A black female comedian delivered a joke recently on TV that went something like this "I think it's important for white people to get to know black people better...at least then, you might have a reason for not liking us." Jokes, stories and anecdotes pass from generation to generation can sustain prejudice, but they can also help us understand our own personal history so that we can draw strength from knowing who we are.

Carrie Mae Weems investigates the power of racial jokes and explores the tradition of oral history in her work which incorporates photographs, narratives, autobiographical accounts and hearsay. Weems feels that "there is something grand in the knowing and creating of ourselves, and something grander still about how we know and create our personal histories." She transforms these feelings into photographs and text that expose our need to understand our personal prejudices while uncovering our profound will to ignore them.

In the hands of a less skilled artist these ideas could be overwhelmed by reactionary ramblings or dismissed as rhetorical preachings. Weems is a skilled storyteller, she conveys her strong personal convictions so that her point is embraced , while the listener is engaged by how the story is told.

Carrie Mae Weems was an Artist-in-Residence at Light Work from July 1-30, 1988. She lives in Northampton, MA and teaches photography at Hamphshire College in Amherst, MA and at Hunter College in New York City.

Jeffrey Hoone (c)1988
The seminal Kitchen Table Series by Carrie Mae Weems is widely recognized as a masterpiece of performance and story-telling within the photographic image. In this series, Weems uses a subtle vocabulary of props, gesture, and gaze to frame complex questions about identity, gender construction, representation, parenthood, and the nature of human relationships. Weems describes her intention of Kitchen Table Series as a personal view on the world around her, “I endeavored to intertwine themes as I have found them in–racial, sexual, and cultural identity and history–and presented them with overtones of humor and sadness, loss and redemption.” The nonlinear narrative and issues presented in Weems’ Kitchen Table Series remain as topical and thought-provoking today as when the images were first created in the early 1990s. Rendered in exquisite black-and-white, this Gelatin Silver Print is hand-printed by Griffin Editions in New York City.