John Fago
Nomad Women in the circulation around the Johkhang Temple - Lhasa, Tibet , 1986 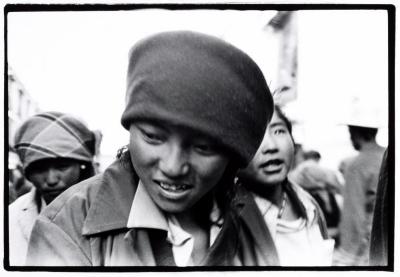 I met Ed Grazda in 1969 and began hanging out at his "World Headquarters" with the Bleecker Street Irregulars.  Thanks to them, I've spent most of my adult life traveling the world on "hard seat" budgets.  They launched me on this path of using Leica rangefinders to record light on black and white film.  My cartoonist father and painter mother were supportive. Perhaps they recognized the same familiar creative imperative that had led them to spend their own lives in the Arts, being reflected forward. In a world of distraction, photography keeps my eyes open and focused.  Decades in, I'm still happily based in a documentary tradition that looks to find the mystery and goodness of life, as she reveals herself when one pays attention.

One dialect in the language of a photographer is that of the storyteller. Epic tales can be told on tabletops, ironic fantasies can be culled from the pages of magazines and newspapers and enchanting anecdotes can reward the patience of a sharp observer. John Fago is a prodigious wanderer, his photographs of festivals in Vermont to temples in Tibet are charged with a quiet patience bathed by subtle intrigue.

During his residency at Light Work from May 15 to June 15, 1989 he edited and printed work from his recent travels. The photograph in the collection of street performers in Tibet shows how he has a flowing narrative ease in portraying moments within the vital confines of an unfamiliar setting. The three boys on the right appear as anxious, playful children greeting the photographer with caution and interest. On the left and closest to the camera one boy has missed his cue, his eyes closed in a moment of clowning, his gaze lost to the speed of the shutter. Positioned in the center of the frame is the performer, the trickster, the shaman exuding the power of confidence and the wisdom of experience. From this single image we know he is the leader and we can imagine him working the crowd in the square with innocent gestures and ancient resolve, pocketing coins and turning heads.

In this photograph and many others Fago provide us with a distinct descriptive starting point that allows us to weave our imagination around the lyrical fabric of his observations. His ability to encourage a moment of pause into a legend of narration is his just reward for a journey well planned.