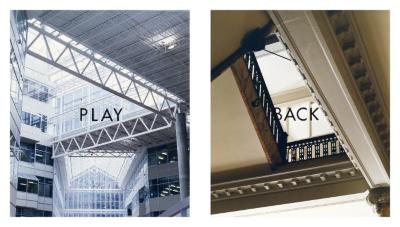 The section in the New Yorker magazine that lists films, exhibitions, and events was recently redesigned. Changes in the New Yorker come about as often as democratic presidential candidates from Orange County California, so their new look is noted with interest. The redesign includes the use of illustrations to highlight selected listings in the magazine for photography exhibitions. Accompanying a listing for an exhibition of work by Sherrie Levine, the New Yorker used a drawing of one of Levine's re-photographed Walker Evans photographs and titled the drawing, After Sherrie Levine's After Walker Evans…What wrath has modernism wrought?

Michael Gibbs, who spent March 1989 in residence at Light Work, continued his recent work that deals conceptually with 'confronting the ghosts and evaporated spirit of modernism. Bernard Malamay suggested that, 'the throw of the dice will never replace chance', and as Michael Gibbs suggests in his work, the use of paradox will never abolish modernism, but can provide the building blocks for new perspectives for artists activities.

Gibbs was born and educated in England, and has lived in The Netherlands since 1974. He came to use photography through a circuitous route mapped out by his involvement with visual poetry in the 1960s and early 1970s when he used photography to document objects for his books. In his new work he combines images that he has made, and images he has borrowed into anecdotal narratives that are often punctuated by words and phrases.

He often works in room size installations that attempt to de-focus the overwhelming sense of history that pervades European life where the 'dead crowd out the living.' While in Syracuse Gibbs began to explore how Americans attempt to have the 'living crowd out the dead', which should add a new level to the paradox he finds as rich fodder for his critical investigations into the relationship between past icons and future progress.