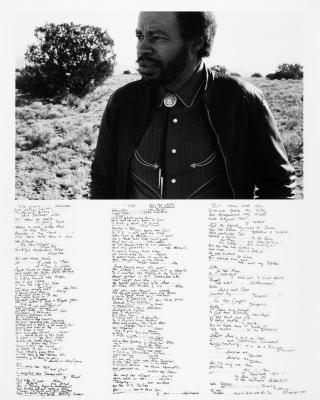 I've finally unlocked some feelings within. My ship has docked from Vietnam's wind. It's taken me awhile to freely smile. There's so much inside hell on the run. Knowing, in my hand, I've held more than a gun. The silence, the pestilence, awaited society's horrendous crime legated.

All was made ready for a place in time. A time in place. And so it was as three sister ships went under the Golden Gate Bridge, I succeeded not in looking beyond the Ridge. For it was there. I saw the essential war was….spiritual. Not these meager ones….physical. I should have been….strong. I shouldn't have gone. For looking back on it all, it's hard to recall just-when I took the bigger fall. I think back to when, I was first shot at. The questions followed and the war….showed. Eventually, I returned fire ignoring personal dire as I whirled and fired on the world's traverse. My soul; wounding the universe. I tried not to think of the moments past, knowing each could the last. As I heard a song from some place called 'Home' would go on in the night to fight the good fight. And as the wars raged within, I tallied the sins. Trying to still the doubt of what's it all about. T'was steadily going sane in the tally of the monsoon rain. Unaware, if I had an ally in Fonda, or Mary Jane.

But, amid the mud and flood, I accepted the sacredness of blood.

And who I was then still reflects my friend for I finally began to understand that killing did not make a man. I knew, I could not kill another even as some called me 'soldier." My blood, running colder.

Life….all the more was endeared. Atrocities….on the score were endured.
Damn Sam!!!
Damn!
Look at what's going down. Yours ain't the only game in town. I think of those I found and lost. Knowing no man can repay the cost. So, it is, I still grit my teeth when eyes of bigotry I meet. For if those who died could speak they'd tell us who's weak. As the reaper comes by and presents your only possession….the present. I wasn't always sure when he would come by again. I wasn't sure when it would be that, the falling of the cards, might name me.

'Cause knowing well his part THE JOKER! was fresh out of hearts. So, I wanted the stroke to be swift, almost folded in '67 December 5th. That night and day the world was filled with fear at times. At times, still wonder if I'm 'here.'

The pain was beyond words. The wounds were like none I've heard. I should have run. Instead of feeling up all those guns. Because, in my violation of some, I trespassed; all's freedom. Hindsight is easier here, in reflection, but then how I stood not in redemption. So, I refused some medals. There was nothing they could bless. Needed them not upon weighted chest. Life is full of irony. So much is sick comedy. We died. Cried. And of those speaking, of honor and glory while so able, while negotiations stalled over the shape of the table. I think of Vietnamese sisters who'd call you honkie or nigger. I'm sure they were more thank surprised to see the look in my eyes. I couldn't believe the racial depravation had preceded us across the ocean.

For amid the villages' bustle most were on the hustle. Trampling one another for the U.S. Dollar. Few would hear you if you hollered.

But, then one day, someone came my way. She recognized my need was beyond that of weed. As so before my need to score upon the scene, appeared a whole, this particular one carried a child to be born.
'No time….for negotiations.'
'No desire….for questions.'

But the man who busted in was more than a friend. He was a husband, or lover. But whoever she was, she was my sister.

Later by the river, as I laid back, I tried not to look back. Though we went undiscovered. Until fetus and cord floated by severed!! In the jungles struggles, victim takes long enough. To find the diamond in the rough in the rank and file, it takes awhile to smile. But, no longer, could I ignore it, this music, in my spirit.

So, without fear, I lent an ear unto Destiny's drummer. Knowing, eventually, I'd be a survivor, stronger.

Forgive me, Brother.
Forgive me, Sister.
For I'm only one man forgiving….ALL I CAN DO. I dedicate this to all of us in the Vietnam PEGASUS who died….slowly….suddenly. To me. To you. And to those who still do.

For many Americans born in the decades before Neil Armstrong's 'giant leap for mankind' the Vietnam War will always occupy varying degrees of their spirit, and inform many aspects of their life experience. Some served, some protested, some profited, and some sent others to die. The amount of ones' spirit and the breadth of experience which the Vietnam War occupies fluctuates within the vast range of human emotion - but rarely settles in comfort or resolve.

Most of the young men and women who came together to protest the War and 'overthrow the military industrial complex' have acquiesced to accepting a slightly more tolerant, scaled back , and easier to live with military industrial complex. The deadly confrontation at Kent State and the bombing of the University of Wisconsin's Army Mathematics Research Center at Madison, that killed a brilliant young physicist, brought the finality and frustration of violent confrontation back home from across the ocean. These violent acts triggered the beginning of the end of the anti-war movement, and the idealism of qualitative change began to fade to liberal ideals, careers, and families.

The young men and women who served in Vietnam suffered through the horror of the War. The sacrifices made by those who returned were met with ambivalence and silence by a country deeply divided, confused, and angry. Even today more than twenty years after the end of the War, when someone mentions that they served in Vietnam, the conversation more often than not dissolves to murmurs, long pauses, and a sudden change in topic.

Don Unrau served as a medic in Vietnam, was wounded in 1971 and discharged from the Army in 1973. Shortly after returning home he destroyed all the snapshots he made in Vietnam in an attempt to trash his War experience, and ease his feelings of confusion and anger at a government he felt had lied to him, and a country that could not understand his pain. After studying photography on and off for several years Unrau felt the need to reclaim the memories contained in the snapshots he had destroyed, and in 1984 he began work on a series of portraits of Vietnam Veterans titled War Stories. Unrau knew that simple portraits could not contain the range of expression or tap the emotions that he knew simmered inside the men and women who served in Vietnam. There were unspoken words that needed to accompany the portraits, and War Stories evolved into a collaboration between Unrau and the Veterans who agreed to participate in the project.

Unrau began the series by contacting a few Veterans he already knew, asking them if they would be willing to sit for a portrait, and then write something about Vietnam in the margin of the photograph. The process often took months to complete. Several meetings might occur before Unrau made a single picture, and the Veterans provided the text at whatever pace needed to find the courage to honestly express their memories and present realities of what Vietnam is to them. As Unrau continued to work on the project more Veterans became interested in participating, and after five years Unrau completed 25 pieces for the series.

Taken by themselves, the portraits depict men and women approaching middle age who all might be part of the same high school class. They all confront the camera intently, and display the intensity of a hidden experience that surfaces for a moment of personal indulgence. The handwritten patterns of sentences individualize their emotions as their words blast out anger, confusion, heroics, and hope.

In 1991 when operation Desert Storm was unleashed to liberate the Kuwait 'democracy,' Unrau imagined the cycle of lies and deceit he knew from Vietnam beginning again. If history was going to repeat itself, Unrau decided that he needed to go back to Vietnam to reclaim his personal history. Until that point he only knew Vietnam as an icon for pain and confusion, not a country that people called home. He got the opportunity to return in 1992 with a group of Americans who were going to Vietnam to build clinics. In exchange for a few weeks of work Unrau was able to spend several more weeks traveling and photographing throughout the country. His photographs from that trip are included in this catalogue and exhibition along with the portraits from War Stories. This new work titled Meditations Vietnam contrasts severely with the images from War Stories, and at the same time gives the images in War Stories another degree of measured tension. The anguish and pain in the faces and words of the Veterans in War Stories are nowhere to be seen in the casual daily lives that Unrau has captured in most of the photographs from Meditations Vietnam.

In a few of the photographs there is evidence of War. An unobtrusive marker that locates My Lai, bomb casings resting against a mural painting, and a jet suspended on a pedestal in a city park, are only faint and almost forgotten reminders of the War, as if they were artifacts lost in a cavernous museum of living history. Taking his cue from the diminished stature of these all but forgotten relics, Unrau records a few on film and moves along. Most of Unrau's images from Meditations Vietnam are not much different from the photographs that a sophisticated traveler, who wanted to remember his first impressions of a new and different place, might bring back from a well-planned journey. When Unrau photographs a group of adolescent girls in Hanoi they line up in a row and smile just as they do in Philadelphia or Chicago or LA. In other pictures, tennis players wear white, Coca-Cola is the drink of choice, and young lovers pose for a romantic picture taken by a friendly man just for the asking.

Unrau's trip back to Vietnam allowed him to connect with the people who live there on a human level. The photographs he made embellish persistent bad memories about Vietnam with something more positive, and perhaps more ordinary. More ordinary is probably a place that most Vietnam Veterans would settle on being in, and Unrau's photographs offer some comfort that such a place can exist as a state of mind, if not in the location one calls home.

Vietnam is the story of our generation. It unleashed a torrent of violence in the United States that persists in the streets of our cities, in our classrooms, in the music we listen to, and in the movies we watch. Not all the violence is out in the open, we harbor the violence inherent in the frustration of failed dreams, of changes that we were not strong enough to enact, and of sacrifices we were too week to make. The courage to face their demons that Don Unrau and all the Veterans who collaborated with him on War Stories, and the solace of ordinary life that he found in Vietnam in 1992, give us hope that the depth of human emotion provides us with a reservoir of consciousness and empathy that we can draw on long after we think it's empty.