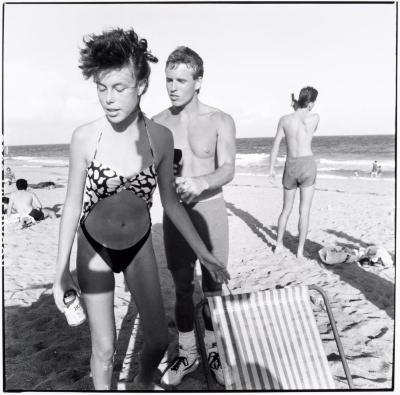 Eric Breitenbach's photographs are measured by his steady timing and resolving judgment. He is comfortable working on extended projects where he can focus his attention on the character of his subjects. The photograph to the right is from a series about the black neighborhoods of Sanford, FL, completed in 1990 with a grant from the Florida Endowment for the Humanities. Like most American cities, Sanford is divided into a monochromatic spectrum of black and white.

During the four months he spent on the project many of the images he produced echo the intrigue and respect that he found in the quietly industrious outdoor barber shop pictured here. In an enlarged essay about Florida, Breitenbach often paused at the State's infamous beaches. In a moment at Fort Lauderdale, Breitenbach captured with uncanny melodramatic precision the ticklish and tender results of combining adolescence and alcohol with a week away from home. In the photograph titled Immokalee, Florida, three men invade the picture frame blowing hot air music at a young girl who seems neither distracted by, or interested in the commotion of attention around her. The delicate costume folded over her arms is the only evidence of her connection to the celebration that is about to begin or just recently past.

Centered amidst the music and machismo Breitenbach fashions a tenacious description of distracted innocence attracting boisterous attention. Photographers can hardly change the world they describe, but as we see in the work of Eric Breitenbach, they can give us the opportunity to pause and look brightly at our fears and fascinations.

Eric Breitenbach lives in Sanford, FL and participated in our Artist-in-Residence program from July 15-August 15, 1990.